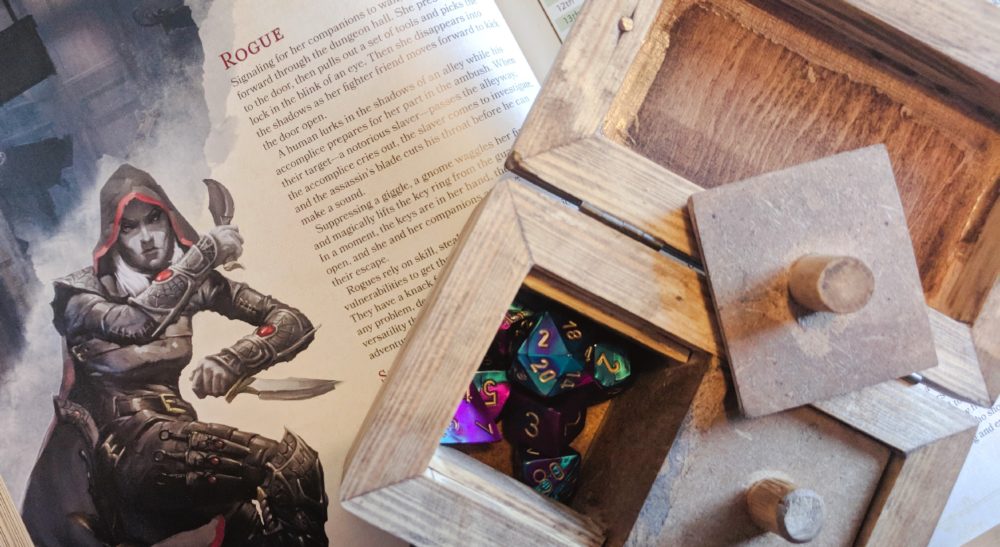 One of the biggest things that can be daunting when starting up is making your Dungeons and Dragons character. It can seem a little permanent – what if you don’t like the character and you’re a bit stuck with them? What if they aren’t convincing or easy to RP? So I’ve decided to share how I went about creating my characters, to try and help you on your way to playing D&D!

Let me first introduce you to my three characters that I’ve created so far. Firstly, there was Regan – the Rogue Wood Elf with a thief background, who was cunning, dexterous and chaotic neutral. I picked him by first picking my class. He didn’t really favour relationships with people over gold, and he was always the one to whisper in the ears of more powerful men, to get them to do bad things.

Next there was Kasai, the Fire Genasi Druid with a thirst for knowledge, who was shunned by the people who raised her (because they lived in a library and she accidentally burned it down). She is chaotic good and always favours scripts and scrolls over loot.

Finally, there was Quinver, the Changeling Bard. He can change his appearance to suit the mood or song that he sings, and he was originally a performer in a court. He’s playful and sees the joy in everything but also enjoys annoying people and laughs at awkward situations freely.

All three of these characters, were made with one thing in mind… Myself.

I chose elements of myself that I liked, and then exaggerated them for the character. Regan was great when I was feeling anti-social and is a perfect first character as you could mistake my initial shyness for his dismissive nature. Kasai is just a pure Ravenclaw and 100% me in her thirst for knowledge and passion for learning – she is like a mini librarian but more fierce! Quinver is my latest character and I love his changeability, his strangeness, he really captures my sense of humour and my joy in small things.

Another element of my personality, my boyfriend (lovingly) calls “The Duchess”. It’s that little pompous part of me that can be quite demanding but (apparently) endearingly so. I think I want to make her into a character but I don’t know how long I can be deliberately obnoxious for! Perhaps some time in the future…

Picking your Dungeons and Dragons Character

When you pick your first characters, make sure they are “you” on some level. If you’re generally a good person, then picking an evil character would be like going against your nature. Write down the traits you have, and then use them as a starting point. Then try to pick the race and class around this – you can see more on how to pick your class here. If you’re strong willed, maybe you’d be a good Dwarf, if you’re fierce and brave, perhaps a Dragonborn; if you value knowledge, perhaps an Elf or something else with a rich history.