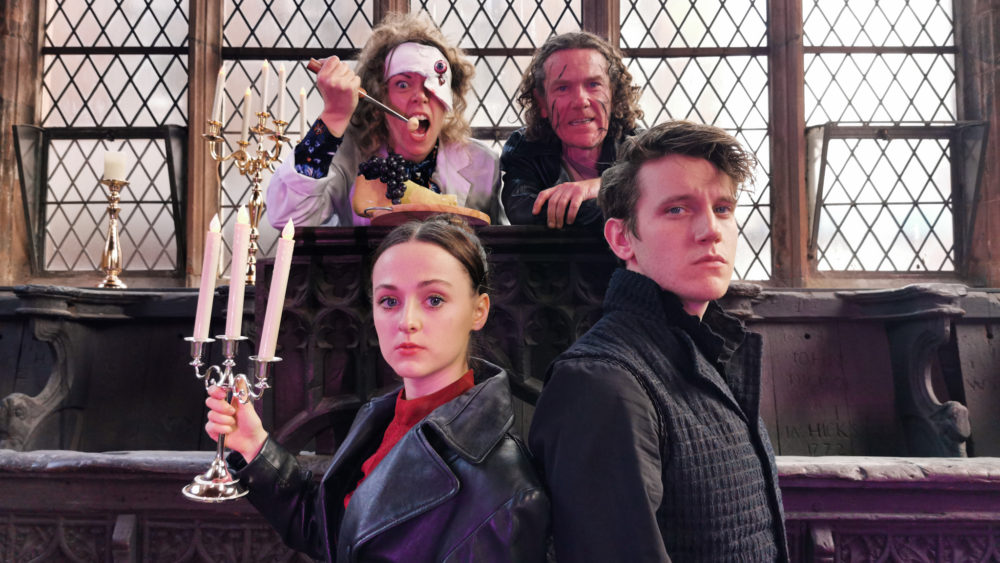 It is with much anticipation that I wait in the Old Grammar School in Coventry to celebrate the release of Mary Shelley’s Frankenstein at the Belgrade Theatre. Along with the cast from Nightmares and Nibbles, we settle down to chat about where they draw their inspirations and how they feel about the characters they play.

I host a Q&A with Ben Castle-Gibb, who plays Victor Frankenstein, Eilidh Loan who plays Mary Shelley and Kathryn Hanke who plays a whole different Mary – the monster from the incredible immersive dining experience “Nightmares and Nibbles”.

…Do you see any parallels between yourselves and the characters you play? Where do you draw inspiration from?

Eilidh – As a young woman and a creative I feel a strong connection with Mary Shelley. Shelley’s book was a political statement as much as it was a sci-fi horror novel and I feel it’s important to draw power from historical figures such as her and learn from them. As an actor I find it quite freeing to be able to interpret her character, and drawing from the talent of Rona and the team we have worked collectively on Mary’s character and helped develop who she is represented as in the play.

Ben – I feel a connection to Victor within his flaws; his unbridled ambition often makes him cast his relationships aside in an attempt to pursue his dreams but then he has real heart and will always try to make things better. I relate to him in that way.

Kathryn – I am similar to Ben in that I feel I connect with Mary in her tragedy and flaws. She’s a tragic character as well as a comedic one. There’s a fine line between the two and she’s essentially a ruthless teenager who just wants to break free of the control she’s had to face her whole life – who doesn’t feel like that sometimes?

What did you do to prepare for the roles you play?

Kathryn – At times I need to fully lose control in order to portray Mary (the Monster) and that needs to come from somewhere deep within. It often comes from a place of rage – I often harness the feeling I get when people think that because you’re a female and a comedian you can’t command a room. Nightmares & Nibbles is an immersive dining experience commanded and run by two women as a double act – it’s quite unique in that fact.

Eilidh – I draw from research into Shelley herself and her connections at the time which Rona Munro touched upon in her re-imagining of the play. I feel we should be pioneering the representation of strong young women in theatre and literature. We’re only just seeing a shift now into seeing strong women being represented on stage and it’s strange that it’s taken so long. I harness the connection between us and the strength in what she stood for – that great, ambitious men are responsible.

Ben – That is part of where I draw my empathy from as an actor when I play him and that is what helps me to prepare. I often find I am most drawn to characters who are gritty and driven by their emotions and as I am generally quite a guarded person. It helps me to prepare if I connect with the conflict within the character, what makes the emotive and what is it that they are fighting for. I harness that mindset before a show.

One for Eilidh… As you play Mary Shelley, is there anything you’d change about Frankenstein as a novel?

Eilidh – Kenneth Branagh’s version is quite interesting, where Frankenstein reanimates Elizabeth once she dies. He does it for himself but then she becomes the monster’s bride – I really like that alternative adaptation. What I really loved about Rona Munro’s adaptation is that she gave Elizabeth a more powerful voice, which is represented in the play by Mary listening to her and never writing while Elizabeth speaks. It would have been brilliant to see how her character could have developed had she made the choice to leave Victor and she’d survived… However I wouldn’t make any change to the novel itself, I feel it’s remarkable as it is!

Finally, name one thing you like and dislike about the characters you play within your productions?

Kathryn – I love her anarchy and chaos – Mary doesn’t have any sense or acknowledgement of societal norms as she was raised in a lab as someone’s creation. Because of this, she was always ‘the favourite’ I don’t like the part of her that conforms, or when she’s paraded out as a spectacle, as it goes against her nature.

Eilidh – I don’t like how Mary Shelley doubted herself initially – whenever she doubts herself and doesn’t think she is capable then it’s a time that she loses her power – but of course I love her passion, her creativity and all that she stood for.

Ben – Victor Frankenstein has a fire to him, an ambition and drive that nothing can satisfy and he has a lot of heart. His downfall comes from his blindness to doing the right thing, and not listening to those he loves, which makes him a brilliantly flawed character.

Special thanks to the Belgrade Theatre and Vortex Creates

You can still grab tickets to see Frankenstein at the Belgrade Theatre, Coventry.

You can dine with Nightmares and Nibbles, brought to you by Vortex Creates throughout October 2019!