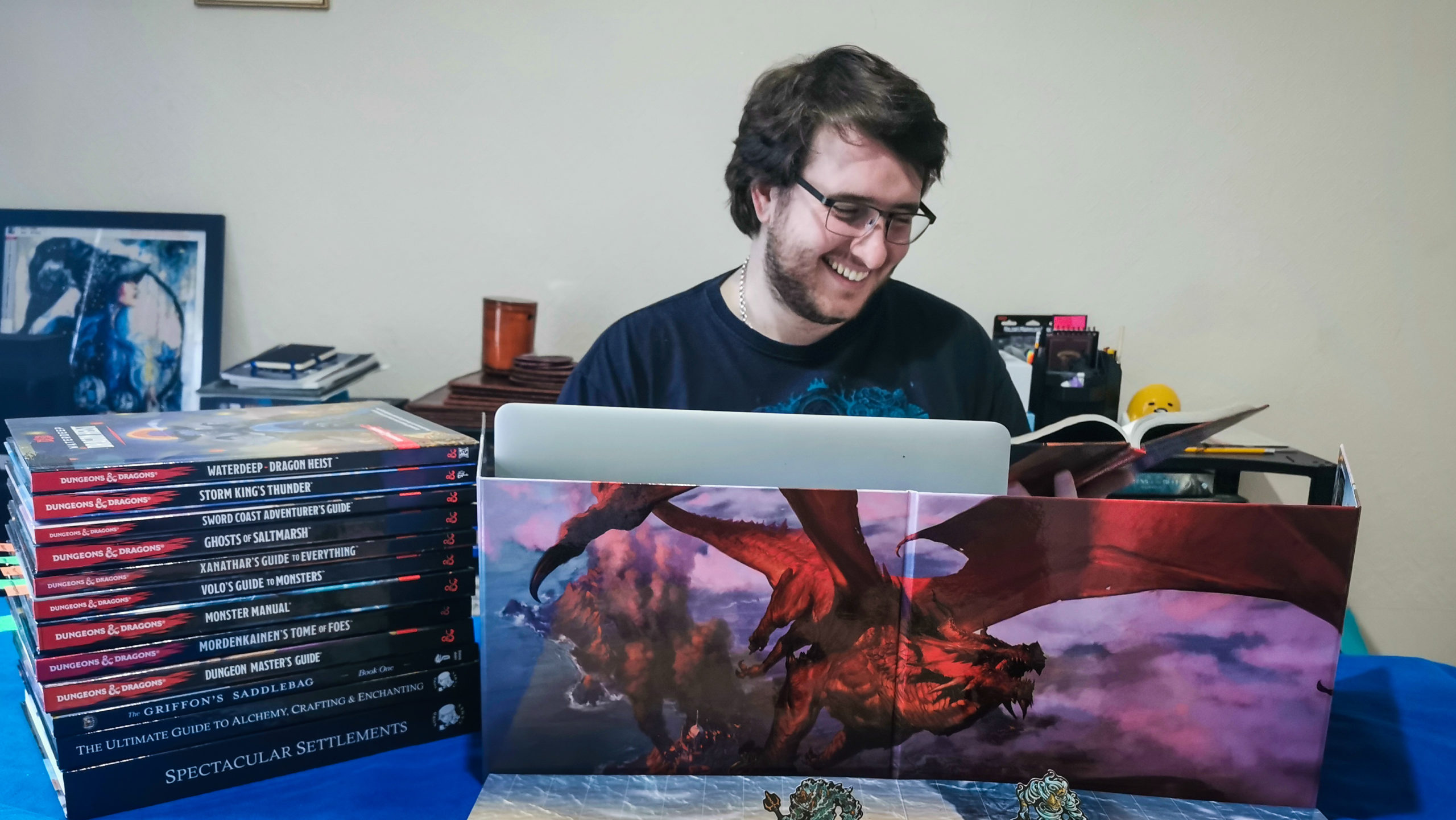 Way back when he first started out as our DM, I asked Stef to give us his top dungeon master tips. Now with over 3 years experience in an (almost) weekly campaign, and now that I’ve started to run my own games, I decided to have a chat with Stef about the things he and I have learned on the way!

Hi Stef! We’re now 3 years into our regular D&D game together. Having played across different campaigns with us, what have you learned about our party?

As a party, you seem to thrive best with a mixture of RP and combat. A lot of parties tend to lean more towards one. You guys keep surprising me which keeps me on my toes and I love it.

You’re now running an entirely home-brewed world for us (which we love). How long did it take to build the foundations?

I’m glad you like it! It took me a few months to get the general lore, pantheons and the start of the main story together. As the sessions have gone on, more got added to the world and lore. The biggest tip I have is to start small. You don’t need to have every city fleshed out; just the one the party starts in or near.

I’d agree – I tend to plan only a session or two in advance and have a skeleton for the rest of the world!

Have a few points of interest fleshed out too that are in and around the settlement. I would recommend having some meat to the world background, but again, it doesn’t have to be complete to start the campaign! Building a world from scratch is hard work. Taking inspiration and cues from movies and books is a good idea too.

It’s hard to prepare for every eventuality! What’s the most unexpected thing that’s happened in the campaign so far?

I think the most unexpected is the way and luck with foiling the assassination plot on King Farkas. Although I bet you have different thoughts on that now! (Amy: Yeah, he turned out to be a bastard.) A small thing I had to create on the fly was when Jamie appeared for a few guest sessions and you all decided to have an impromptu musical gig in a tavern!

Well, we are an eclectic bunch! I miss our in person sessions but online was what stuck after lockdown. Do you find it easier?

In-person is nice, as role-play can feel more authentic and you are in the same room as your players, rolling dice together. However, moving online, for me, is far better for combat. Considering I don’t have the budget to invest in hundreds of pieces of Dwarven Forge, utilising programs on the PC makes creating battle maps “easy” and I can play with different lighting and spell effects. Combining in-person play with using the online features/tools, which is nice every now and again!

Buying models is one downside to in-person play! I’ve spent so much already… Have you spent much more since we last spoke?

It certainly has gone up, but not by all that much! The pandemic and moving to online has certainly helped with that, as I have not had the need to buy more dice or minis. However, moving to online play has resulted in other costs. By far my favourite and most useful purchase is the license for Foundry VTT (virtual table top). It was a one-time purchase, and with Em (Stef’s brother and a player in our campaign) using his server to run it, I won’t look back. Overall I prefer DMing as I have use of my two big monitors, easy access to various tools and guides.

Any useful resources you can share for online play?

As for free resources, donjon is a great website for dungeons, quest hooks and the like. DMsguild is another great resource – not all the content is free but there is plenty on there that is. I also want to give a shout out to Dungeondraft and Wonderdraft; two fantastic one-time purchases to help with building various types of maps!

Do you have any advice on what NOT to do when DMing?

Don’t be afraid to go hard on your players in combat. I will admit, I still fall foul of this sometimes; your players are stronger than you think they are and their tactics in some combat encounters can really sway the direction of that combat. As a DM, I want to make combat difficult; not a walk-over as I feel that a walkover is not fun all of the time. Don’t get me wrong, it can be quite amusing when the party absolutely destroys your deadly encounter without getting a scratch!

I always end up throwing extra monsters in because I underestimate my players… I make every encounter “deadly” but they smash it every time! I was thinking though… what’s an absolute NO-NO for a DM?

I have read a few horror stories on the internet, but I think one of the biggest things that a DM should not do is turn the game into a DM vs the players scenario. The DM is not there to one-up the players; they are there to facilitate a story that the players help write. Don’t go making countless encounters that the players will never defeat. By all means, make them challenging and difficult, like I said… but the fun dies when it feels like the DM is against the players.

*I nod my head profusely*. What’s your biggest challenge with DMing?

I will admit, the biggest challenge is finding motivation to prepare sessions after long weeks at work. However, the positive comments from the players really help get stuff done because I know you want to come back and keep on playing. The biggest challenge in session though is giving each player enough spotlight.

That is the trouble with a larger group, and why I don’t think I will be going above 3 people in my group any time soon! Any overall tips and tricks for new DMs?

I think it’s best to not over-prepare. Let the players dictate and go with the flow. You will need to improvise a fair bit, but that’s part of the fun! As a DM you do not need to have a plan or outcome for every eventuality. My players seem to like peril. (Amy: We do…) If your players are the same, don’t be afraid to go hard on them in combat, as I mentioned!

Thank you for joining me and sharing your dungeon master tips, Stef! One last question… who’s your favourite NPC this campaign?

No problem! My favourite NPC so far is Onas, one of the high ranking mages of the group the party are trying to defeat/scupper. He gets on the party’s nerves; (Amy: Oh my god he really does…) He’s smart and witty and plays the long game, which seems to exacerbate the party’s hatred for him, which I love.