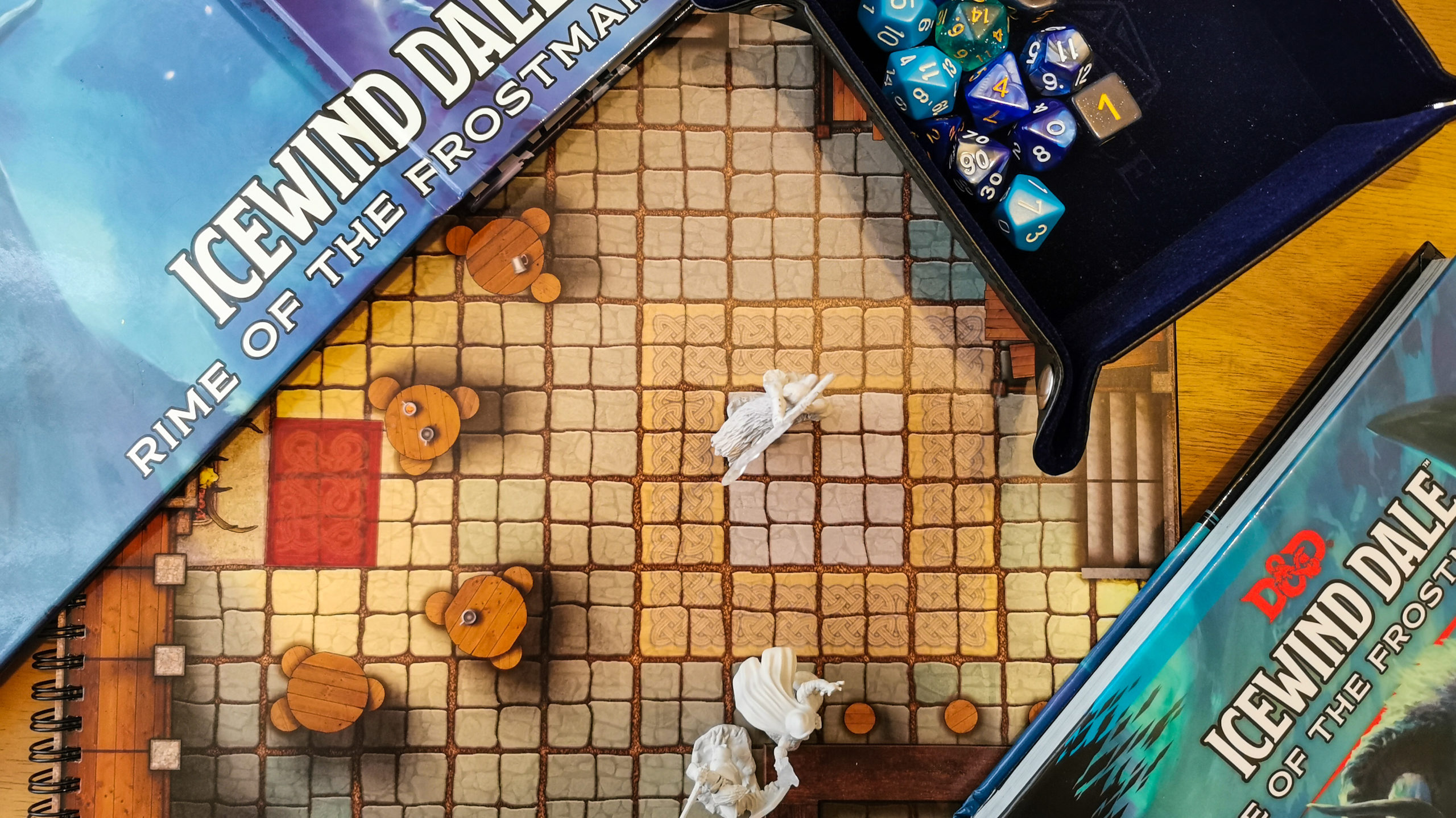 A little guide to making Icewind Dale taverns a little more interesting. In a particular part of the campaign there is a series of 5 inns with minimal description. After my players took a particular interest in these inns as a “bar crawl” I created a mini-series of taverns that had unique quirks. Here’s a guide to how you can make these Icewind Dale taverns an interesting destination in-game.

The Icewind Dale quests and side-quests are built on rumours and of course the best way to give those rumours to your players is to have them ‘overhear’ them in a bar or tavern. Within one of the ten-towns (a collective of towns within the icy tundra setting of the campaign) is a set of 5 inns, briefly mentioned as below:

Five taverns stand in a semi-circle around a central yard in the heart of Bremen. As the story goes, five brothers originally intended to build a tavern together, but each assumed he would be the one to run the business. Since none of the brothers would work for the others, each built his own tavern… The five taverns are called Stones, Even Keel, the River’s Mouth, the Grumpy Moose and the Black-bearded Brother.

After there being very little else involved in the description, I took this concept and made it seem like a popular tourist destination – a place that, despite there being little affluence and life elsewhere, had a little bit of life to it! It’s much needed in Icewind Dale, as it is such a bleak setting and story.

As the players went around these 5 taverns they would take constitution saving throws for each drink they had, the stronger the drink the higher the DC. (5,10 and 15 respectively) If they failed, they would roll a d100 and take a trait from this home-brewed drunken trait table. I am really happy that my players really got into RPing the consequences!

The name ‘Stones’ made me think of the phrase ‘You don’t have the stones!” and immediately I thought, this has to be a rough-and-ready pub full of big bruisers. Perhaps the most traditional tavern out of the 5, pick a fight with the wrong person in here and you’d be out on your arse. That said, it was really good for cheap drinks and if you wanted to you could take on one of the well ‘ard patrons in an arm wrestling match. (Strength vs Strength)

The name of this pub inspired me to make something contradictory to it’s name. Everything in this bar is off-kilter. When players enter they have to make a dexterity saving throw (DC10) or risk falling over and getting laughed at. The players can play darts here by rolling a sleight of hand check but with disadvantage as everything is wonky. If the players make bets on themselves to win against the house, they can win big money here as it’s a tough challenge.

I used a pre-written tavern ideas table to generate the idea for this one – an enchanted inn where noone manned the bar. Essentially a series of unseen servants served the drinks and took the gold accordingly. Luckily none of my players tried to cheat the system; if they had they would have been consequences! Honesty is the best policy. In this inn, as there were no people monitoring, it became a hive of gambling activity. In this tavern they could play a series of dice games, one of which was similar to poker, which you can find here (#6 Gambit of Ord).

For the final two taverns, I basically came up with “end of night” type pubs… the kind that you need to be a little bit tipsy to enjoy. By this point the players were well and truly in the midst of drunken consequences (our Goliath stripped to his furry undergarments on the dance floor when he found himself unexpectedly hot…).

The Grumpy Moose was an ice bar – if you’ve never been to one… basically everything is made of ice. It was colder in here than the frozen tundra outside, but noone seemed to mind. The alcohol was giving them a nice blanket! Not only this, but I also made this bar a little special after I saw a Tiktok where the person had named their drag queen character, Misty Step. I thought it was absolutely genius and have them cameo as a half-orc sassy drag queen bartender.

Related post: How to make your D&D campaign more diverse

The final tavern was a lively bar – basically think sticky floors and loud music. The players missed the earlier entertainment I’d prepared (twin bards who played a full set of lute, drums, flute, bagpipes and lyre between them) and skipped straight to the final performer… who I was very proud of. A small human woman came on dressed as a witch in purple starry robes, with a tray of crystals. She proceeded to then play the tune of Better off Alone by Alice Deejay on the crystals, as dwarves accompanied her with bass notes and it turned into a club setting.

It was honestly one of the funniest and most entertaining pieces of role-play of this campaign so far and it barely took any prior thought on my part. Our Icewind Dale campaign is only 7 sessions in so we’re still really early on and so the meaty parts of the story haven’t kicked off yet. I am glad we took this opportunity to get some hardcore RP in before it became a matter of life and death!