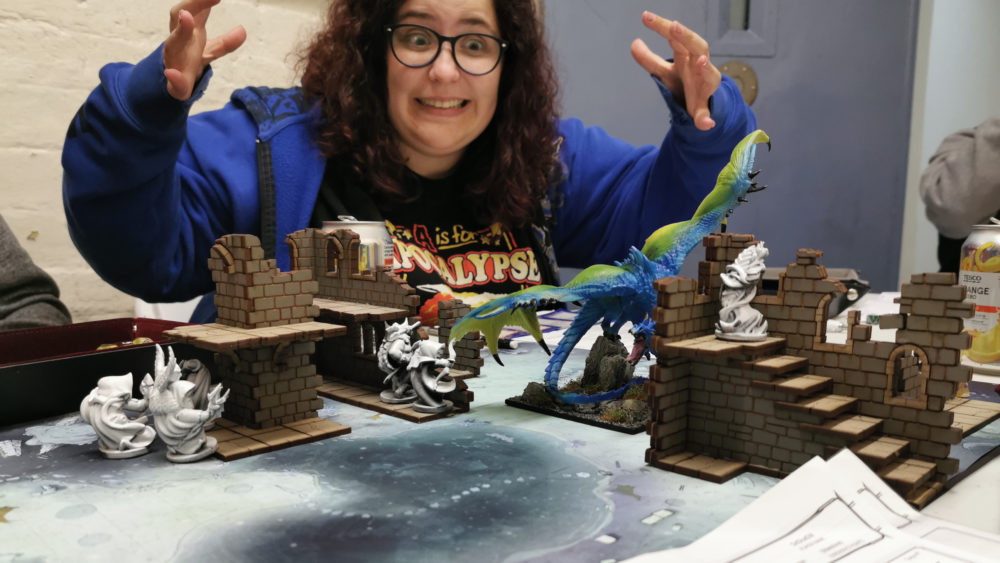 How many people can say they’ve played D&D in an abandoned prison? A lucky dozen of us got to experience the chilling atmosphere and incredible one shot experience run by A Traveller’s Venture – a professional D&D group in the UK. As darkness fell we arrived at Shrewsbury prison to have a night tour and to begin our session…

The gigantic front door creaked open to reveal the night guard, who welcomed us in to the spooky and foreboding entrance way of Shrewsbury prison. The unused underground cells were first built by the Georgians to house prisoners who opted for transportation, and the prison was then built upon by the Victorians and further still in the modern day. The building closed it’s doors to the prisoners (pardon the pun) and opened them back up to the public in 2014 as a macabre attraction.

Before we settled to play, we took a night tour with the guard, who had once been the senior officer in charge of the prisoners. He shared some real life horror stories of his personal experiences, and gave us terrifying insights into the ways that prisoners were treated – we even got taken to the hanging room which was still in use right through to 1961. We could go wherever we wanted and I even went off to explore on my own… but I didn’t go too far!

There were four floors filled with dark, empty cells – I just couldn’t venture away from the group… The further from everyone I got, the more it felt like I could have got trapped in some kind of dimensional loop where the cells go on forever. *shudder* I did, however, brave going out into the prison yard – a vast and echoing outside space so black that I gave myself the creeps and ran back to our small group of players and tried not to startle them as I bowled into the room.

After a much-needed Dominos pizza, we settled into 2 groups of six to play our D&D session. I didn’t know what to expect from a professionally led game as I usually play with my pals on a Sunday night and usually it’s just us shouting random meme-based jokes at each other while scoffing snacks in our comfy clothes and slippers. It turns out, it’s essentially the same thing… but in the best way.

We got all the comfort, friendliness and humour of a session at home but with the added bonus of the incredible map builds, all the right fully-painted enemy figurines (which can be expensive for a stay-at-home DM) and of course an unbeatable atmosphere. Plus, we all got to take home free dice trays, 2 sets of dice and figurines from their sponsors, DnDice and blankets to keep off the chill!

We began the story as a group of warlocks, wizards and fighters who woke up in a prison (very fitting) without knowledge of how we got there, just the knowledge of our powers and our fears. Fears were a new concept which I found really interesting for D&D – by imposing disadvantage / penalties to our rolls when we encountered something we were scared of it added extra challenge. Another challenge we faced was a trust-based puzzle, which was quite a fun way of getting to know one another and laugh at our mutual lack of moral compass…

I played a Celestial Warlock (the characters were randomly generated) and although I only played as him for one session, I really liked the character! He was an wise old man with an owl familiar. If I had to pick out one thing that there wasn’t much of then it would had to be role-play but I was glad as I have to be in the right mood to act and it’s hard to get into a character you’ve just met! But there were plenty of challenging combat situations and great puzzles involved. Plus, something really important… everyone was really respectful of one another, the game was led through really efficiently and the tone and mood was set really superbly by the pro DM and everyone got fair “air-time”.

Overall it was an incredibly successful night filled with chills, danger, adventure, dragon, magic and laughter and an experience that’ll stick with me for years to come. I’d recommend a professionally led D&D session to any player who’s looking for something a bit different and a break from the norm! Honourable mention of my fantastic friend, Bear Archer, from A Traveller’s Venture for the invitation to come along and play.

Enjoyed this post? Take a look at my D&D series of blog posts – Critical Hit! here.