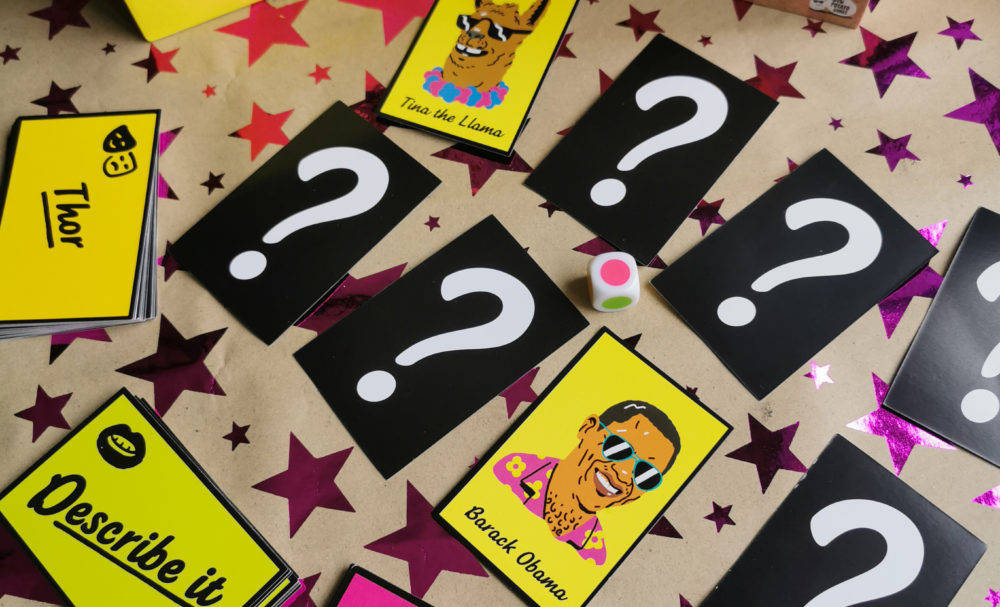 Wondering what to spend that pocket money on? Want to spend some nights in with friends during those cold and wintry days? Then you NEED to get yourselves some Big Potato party games! Here are a run-down of some of my absolute favourites!

I’m going to introduce a points based system so you can work out which game suits you the most! Games will be rated for ENERGY (how much energy you need to play), BATTLE (how competitive it is), IMAGINATION (how much it makes your brain whirr) and FUN (well that’s obvious really…)

The first Big Potato game I ever played was Truthbombs – mostly because it was made in collaboration with Dan & Phil, who I was big into at the time! Truthbombs is as sassy as you make it – the aim is to tell the truth about the people around you by answering questions in the coloured boxes.

You definitely need people who 1. Know you well 2. Are on your level and 3. Can take a joke. It’s all about embracing it when people drop some T! When I played, one of the questions was “What does [Amy] lack?” and the person said… “Tact.” I howled with laughter but the person was mortified when it was outed that he’d written it down! This game has one rule – don’t write it if you can’t own it!

As you may know if you read my other posts (she says in hope), I absolutely LOVE 90’s retro stuff. I’ve been known to carry around neglected tamagotchis, have POGs as business cards and of course, party like it’s 1999. So when Big Potato asked me which games I’d like to try, of COURSE I picked Blockbusters.

I was impressed with this game even before I opened it… Because it was contained within a VHS Cassette box. Cue major geek out. This game is for anyone who likes movies and wants to show off their knowledge, without the pressure of trivia questions. Come up with movies that fit the categories, then act or describe the movies and get points for your team. Simple and super fun.

I absolutely LOVE Obama Llama! It was a joy to play! I was sent this as part of a games night package from another sponsor – read all about that night here – and it was my favourite game of the evening. It’s a game entirely based around rhymes!

You either have to act out, describe, or work out the rhyming couplets. For example if I were to say “An X-Factor Judge, with a gardening implement”… you’d say… Simon Cowell with a trowel. Get it? It’s huge amounts of fun and gets a little competitive as it all comes down to a memory game where you match the rhyming cards to get pairs for your team. Easy peasy!

This game needs some imagination and it’s all about what you and your fellow gamers make of it. You’re given a bunch of object cards and in the centre there’s a scenario given in which you will die imminently. You need to convince the group why the object you pick would be the best to get you out of that sticky situation!

Who says you can’t get out of a spaceship crashing onto earth by building a ladder made with all the ants in the world? You just have to convince the others that your escape plan is the best. The cards can be quite grown-up so I wouldn’t recommend this as a family game, but more one to play with your friends, or once the kids have gone to bed.

This game is MAXIMUM energy so I’d imagine it’s super useful if you want to wear your kids out before bedtime! Where Truthbombs and Bucket of Doom are quite adult, this game is most definitely one for all the family. In short, there are cards and you do what it says on the card, in 20 seconds.

And get points. And win. Otherwise, your father and uncle get really competitive and start shouting at their respective children to be “better” at the game and at life. Just kidding! You don’t have to be as competitive as my family to play this game – but it’s a lot of fun either way.

Thank you so much, Big Potato!

What I love about Big Potato games overall is that they’re just so simple to pick up and play. Nothing complicated, no attention span required but still maximum levels of fun. Thank you SO much to Big Potato again for sending me these awesome games – and thank you for the POTATO PLUSHIE!