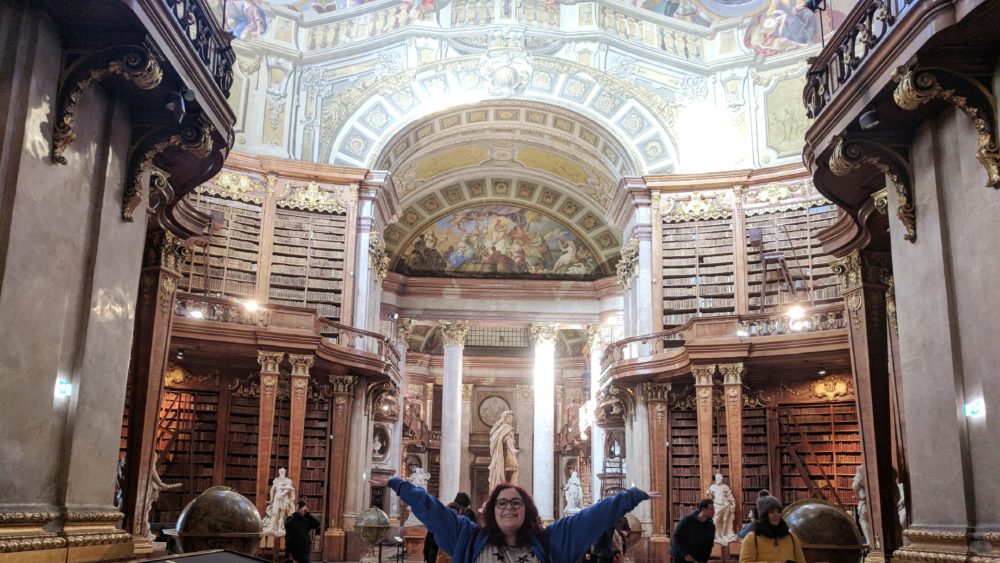 I hadn’t really considered visiting Vienna before this year, when I saw a picture on Instagram of the National Library at the State Hall and thought, yep, that’s the place for me. That library looks like it was taken straight out of Beauty & the Beast, and I need to go there.

You know you’re a Ravenclaw when you visit a country based on how it’s National Library looks… This was one of those impulsive occasions that I tend to act before I think, and somehow everything turns out right. Once I’d bought my flights I then decided what else I would like to see with my tiny budget.

There were hours upon hours worth of museums that could be visited but I only opted for three attractions – the Natural History Museum, St.Stephen’s Cathedral and of course my beloved National Library. I think in all I only spent about €100. For tips on free things to do, check out my next post here (once it’s up!)

Having a trip in Vienna that doesn’t break the bank!

St Stephen’s Cathedral has a spectacular view of the city – at the moment to go up the tower it’s €6 so if you’re only after the views rather than a tour, this is a good place to start rather than paying for the full pass. I did that awful tourist thing where I took pictures with my camera dangling between the bars – eek! Overall though, the view was incredible and it definitely cleared away the cobwebs!

The Main Reason I Visited… The National Library!

The State Hall (National Library) was as spectacular as I thought it’d be! It was absolutely beautiful and cost just €8 to go in. It doesn’t take long to wander through but it’s breathtaking and just the sheer volumes of books there is astounding (not to mention that ceiling!) I just couldn’t believe my eyes.

The Natural History Museum provided us with hours of exploration and was one of the most reasonably priced museums at €12 – it’s the biggest collection of artefacts I’d ever seen, from every type of rock you could possibly imagine (a little Amy’s playground) to preserved animals and human bones and everything in between!

This was also one of the most beautiful buildings I’d ever seen, and my guess is that so many of the others are similar inside! Even the cafe was absolutely amazing and made me feel like a princess as I tried my traditional Viennese food!

If you’re reading this perhaps you’re looking to go to Vienna, or maybe you just want to read what I had to say about it (thank you!) but, regardless I’d say Vienna is a great place for a short city-break, so if you have any doubts then, don’t! Go, go, go!