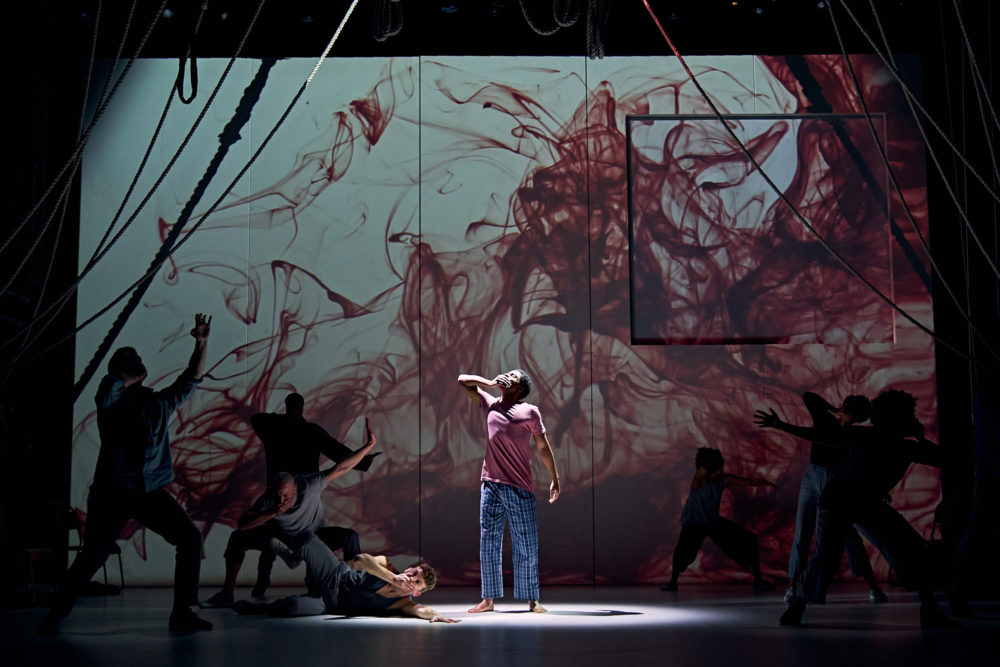 A Monster Calls by Patrick Ness is one of my favourite books, so when I was invited to the Belgrade Theatre to watch an on stage adaptation, I practically snatched their hands off! Never mind the pressure of performing in front of hundreds of other people every night, I don’t think the crew realised what pressure they were under having to impress me. The standards were going to have to be very high indeed…

… and I wasn’t disappointed! The entire performance was breath-taking. Where to begin?!

A Monster Calls is a story about a 13-year-old boy, Conor O’Malley, coming to terms with the loss of his mother by listening to the advice and stories of an ancient monster. Conor, depicted most excellently by Ammar Duffus, perfectly captured the confusion, anger and isolation of this character.

In fact, the entire cast were superb and so multi-talented! Not a single person was “just an actor”; they were singing, dancing, doing gymnastics, acrobatics… you name it. Such a fantastic group of performers. Conor’s grandma and mother were played fantastically by Kaye Brown and Maria Omakinwa respectively – such emotive performances!

Getting the monster right is a hugely important thing for this play and could have gone drastically wrong – it was one of the things I was wary of originally. However, the way that the monster was depicted using only gym ropes and one man was incredible!  The monster, played by Keith Gilmore, was just all-round impressive and gave an incredibly convincing performance. He also had the strength to pick up a grown man on his shoulders from standing up! (Be still my beating heart!)

The play was also technically perfect – the presence of a live band created an amazing ambience that I don’t think could have been captured with pre-recorded music. It just highlighted to me the importance of doing the music right when you’re trying to capture an audience, and they absolutely nailed it. You could tell that a lot of thought had gone into the sound, because every silence was poignant and made you feel uncomfortable (intentionally, of course!)

Visually, the play was very minimalist – as plays do tend to be – but the way they created so many scenes using about 10 chairs and a few small handheld props was extraordinary. I particularly liked the use of colour within the monster’s story scenes to indicate the change to the “dream” world. Overall, it was spectacular.

With regards to the book…

I’ll sign off by saying that book is close to my heart, since I lost my auntie to a long-term battle with cancer just over a year ago. When reading, I could empathise with the confusing feeling of wanting the pain to be over for yourself and for your family. It also touches briefly on the human condition of being endlessly conflicted, feeling complex and often conflicting emotions in a short space of time and how that’s actually okay as long as you speak your current truth. This book resonates with me in so many ways and the play captured these very sensitive moments very well and I cried quite cathartically.

The cast and crew did this book the justice it deserved and for that I’m really thankful. Thank you to the Belgrade for the invitation to review the play, and if you’d like to see it, it’s at the Belgrade until 7th March 2020.