If you could live in any imaginary world, which would you choose? The land of Ooo? Middle-earth? Discworld?
Narnia? Equestria? Westeros? But what if you could pick all of them?

Ready Player One is based in a dystopian future, and yes of course that means the world itself is chaotic and terrible BUT it also means you can live in a VR space called the Oasis.
The Oasis allows you to explore all the sensations of any of these worlds combined. I was so hyped for the film this year that I got advanced screening tickets to go and see it.

And here are my thoughts… my Ready Player One Film Review.

HUGE SPOILER ALERT, YOU HAVE BEEN WARNED. 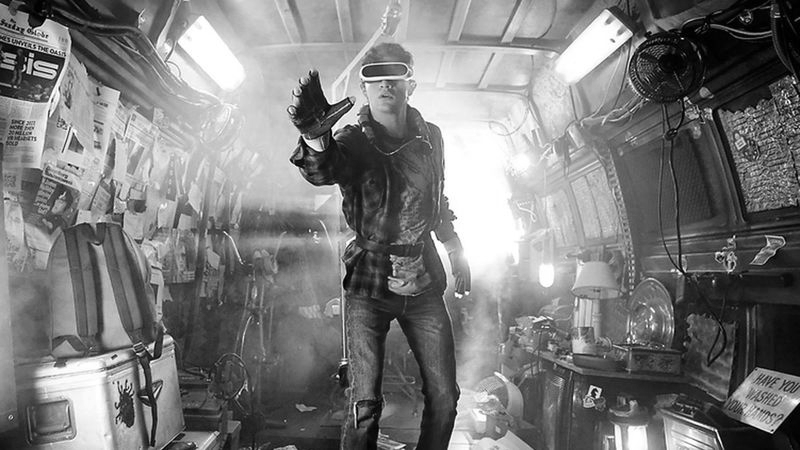 I’ve been a fan of the book for a few years now – I’ve even led book clubs on it and written blog posts about it. It’s been my favourite book for a while – I love the VR element, the 80’s references, the dynamic between the 3 core characters, how it’s written, all the nostalgic feeling. When I heard it was being made into a film I had everything crossed that it was going to be amazing…

And I wasn’t disappointed!

I’ve always thought the book was made to be a film, and it was so much fun to watch and compare the two.  Of course, this movie was clearly made for my demographic – those who accept virtual reality and it’s possibilities, accept the idea of a dystopian world destroyed by over-population, and GEEK OUT every time there was a reference made. So, the positive things about the movie first before I pick it apart, because in my opinion you all should see it:

The visual effects are spot on – the weapons, characters, explosions, races… everything!

The references go from glaring obvious all the way to so subtle that you have to double-take, so everyone can feel included and it’s almost like you’re finding your own Easter Eggs.

The pacing is great and shows really well the stark difference between the vibrant online world and dystopian reality.

Okay, now the bit I know you all want to know… the negative bits.

The romance between Parzival and Artemis wasn’t sold enough. My friend who hadn’t read the book said it seemed a bit forced, and I had to agree. If you hadn’t read the book you wouldn’t understand it, as they didn’t include all their awkward online chats that SO MANY people our age can relate to from the MSN times. (RIP)

They missed out some of my favourite parts. Y’know those awkward coming-of-age moments from kids raised to communicate primarily online? Also they didn’t have the same challenges as the books, they’d totally changed. Obviously it helped cinematically and it did have a lot of good jokes in it’s own right, so we will let it off.

They changed the overall message of the movie (or at least watered it down). The book is so deeply moving in terms of it’s ideals of friendship overcoming all; whether it be actual physical and mental challenges, or challenges imposed by society against race or gender. This film was turned into a happy-go-lucky action film but I’d say that’s okay. As a feel-good, shallow movie, they managed to cram in all the things they needed to in order to sell the idea of this VR world and make it a viable alternative to real life.

So many people are calling this “Recognising things: The movie” but y’know what, that’s what drove my love of the book and that’s what also drives the film. That feeling in your chest that you get when you see some of your favourite characters cross-over into a movie world.

I definitely missed so many references, and feel like I need to watch it another 10 times to make sure that I get them all!