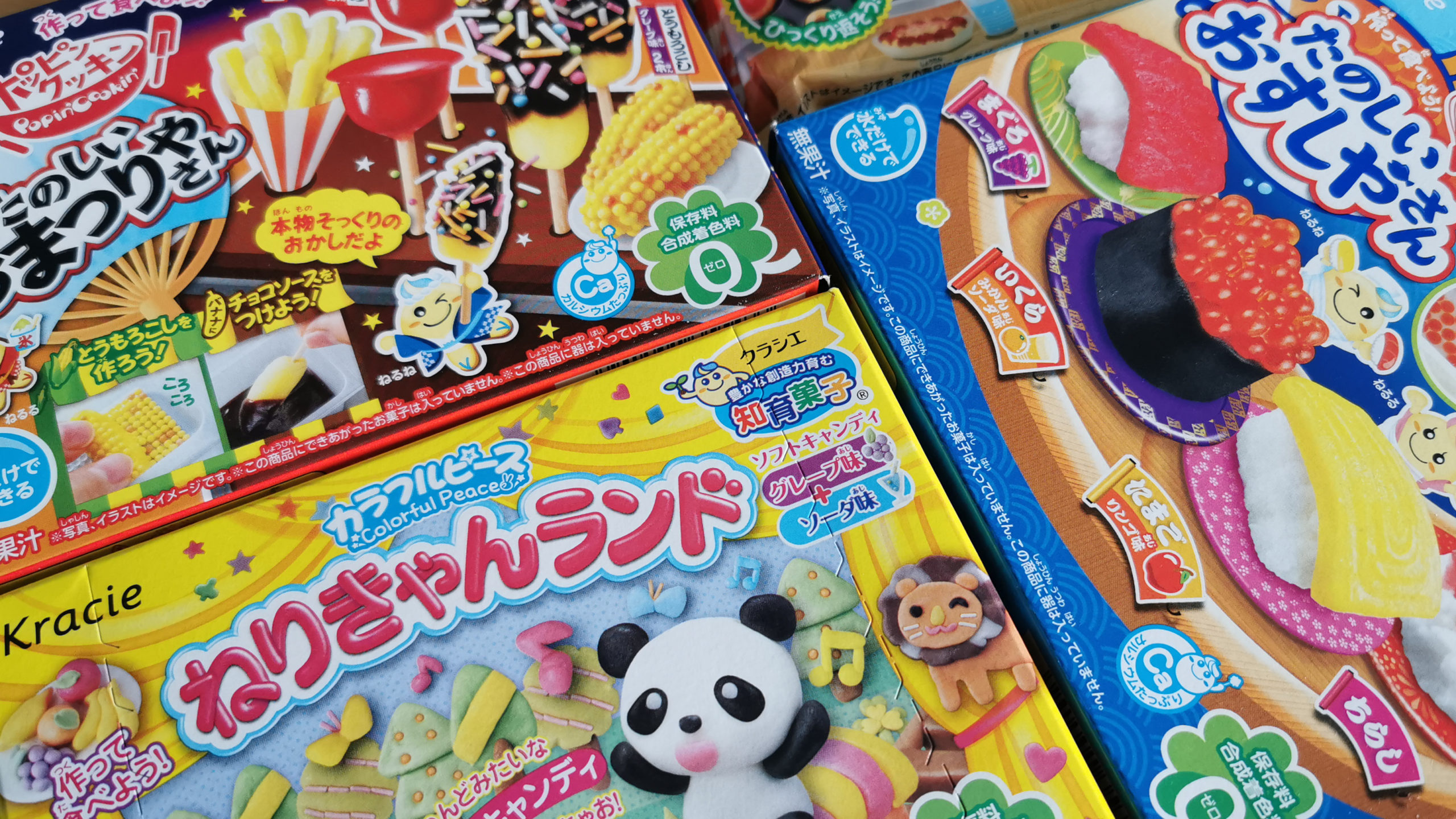 Although English chocolate and sweets are pretty amazing, one thing I’ve always felt they lack is INTERACTIVITY. I’ve been buying these Popin’ Cookin’ Japanese DIY sweet kits for years now and so I realised it’s about time I did a proper blog post, reviewing some of my favourites!

Did you know that I’ve recently been learning Japanese? Yep! So now, instead of reading the English instructions for these Japanese DIY Sweets, I just… stare at the pictures and pretend like I know what I’m doing because Japanese is REALLY HARD.

All the kits I’m going to review are from the Popin’ Cookin’ series by Kracie. I’ve started with two kits in the “Colourful Peace” series – definitely something to consider for a peaceful lock-down activity! Japanese DIY sweet kits were of course, made for kids – but they’ve caught on so much here in the UK too. I got all of these kits from TofuCute – a UK based kawaii product store.

This is actually the second time I tried this kit, as I first came across it in Japan Crate. It was so much fun that I just had to buy it again and share it with you all. Visually, what draws you in straight away is the cuteness of the creations and you can tell from the packaging that this is going to be a true DIY kit. (A lot of the time, you can get things claiming to be DIY but they’re not that fun.)

At risk of just reading out the English instructions, you first mix together one powder sachet and water, and then mix up your colours. What I liked most about this kit is that it’s educational and teaches kids about colour mixing and it kinda feels a bit like you’re doing actual science experiments! As you dropper the liquid colours into the clear liquid, they become solid! Scieeeeence.

I’d say for anyone seeking out a little bit of zen, this is the kit for you. It’s so satisfying every step of the way – from the way the bubbles form, through smoothing out the powder onto the backs of the gummies, to the way they peel off so easily from the mould. I wouldn’t really get my Japanese DIY sweet kits for the taste of the sweets, but as far as these go they are super tasty too. Super worth the £4.99 I spent on it considering it gave me a few hours of entertainment!

This kit is essentially Playdough, but with the added advantage of being EDIBLE. Count me in! When I opened the package there were the primary colours blue, yellow and… pink… sitting there waiting to be moulded. Initially I thought that they’d have icing sugar like texture but these were fully gummy sweets! It came with a mini “rolling pin” (which I didn’t use as it was essentially just a straw), and packaging which was covered in suggestions on what to make!

The dough had an incredibly sweet grape smell as I opened each packet and I really had to resist the urge to eat it all there and then because… It was time to get creative! After reaching out for suggestions from friends, I ended up making a chicken, a penguin called Edgar, an alien, a rabbit and a fruit bowl (because you’ve got to get one of your five a day…). Tasting it, it had a very strong, distinctive grape flavour and a similar texture to Pucco, another Japanese candy that’s well known and loved!

When making I did notice that the gummy candy started to dry out and become more difficult to mix colours, but other than that it was another completely zen lock-down activity to keep me busy. I’d recommend either or both of these kits if you wanted to keep your kids occupied for a while (particularly the Nerican Land one as it doesn’t need supervision!)

Enjoyed this post? Looking for more recommendations? Check out part two of my Popin’ Cookin’ review soon, where I talk about Sushi, Takoyaki and Matsuri!