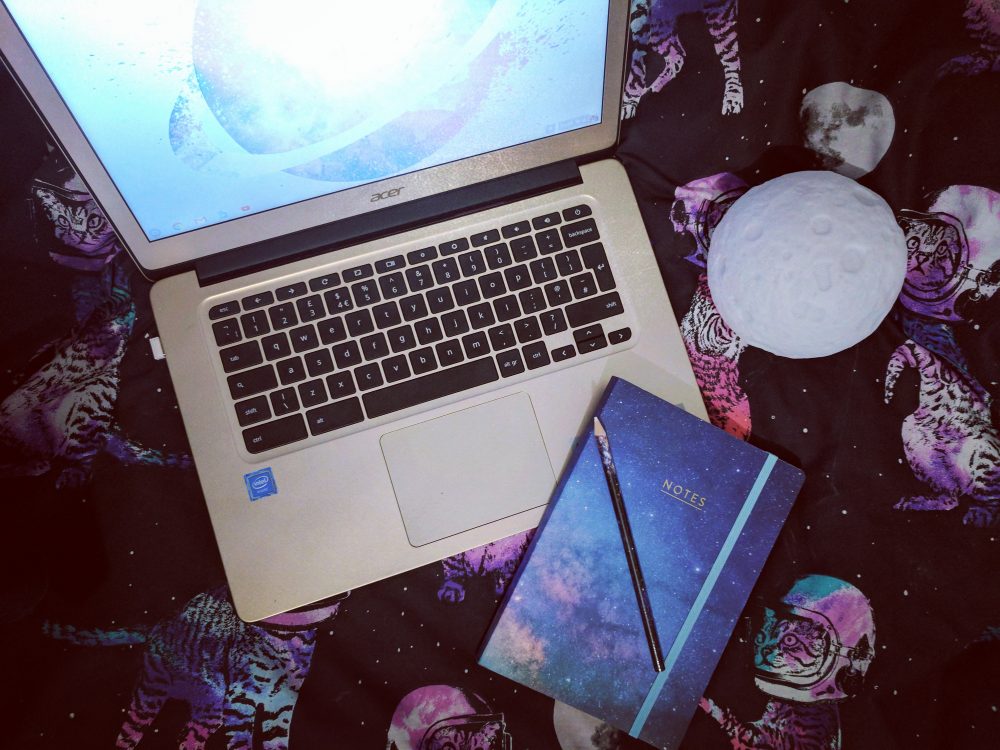 We all know that there are a LOT of sci-fi stories out there. I mean, there are whole sections of book shops dedicated to the genre. Speaking of which, I now sponsor one! I pledged to help my local BookShop’s expansion and they let me brand their sci-fi section. In celebration, I decided to explore what makes a good sci-fi story?

To answer this question, I took 2 sample texts, from “Amy’s Storys” (sic) written by 8-year-old me, to analyse as core texts. It’s as good a starting point as any… 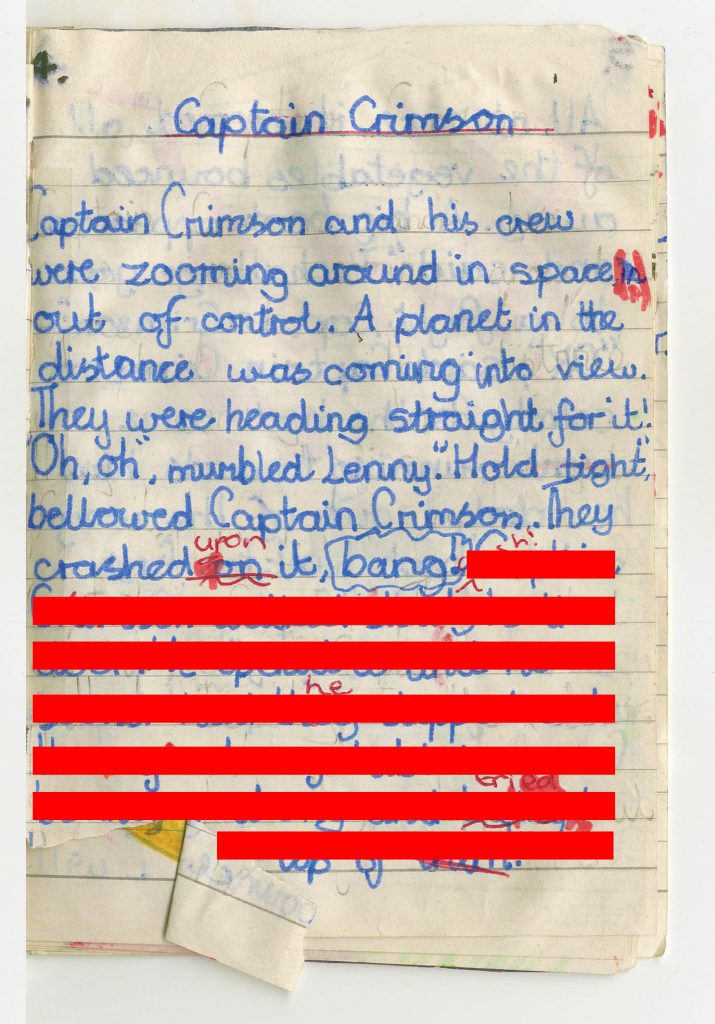 Text reads: Captain Crimson and his crew were zooming around in space out of control. A planet in the distance was coming into view.  They were heading straight for it! “Oh Oh”, mumbled Lenny. “Hold tight!” bellowed Captain Crimson. They crashed on upon it, bang!

But think about relativity…

I don’t blame my 8-year-old self here for having no concept of distance. I still don’t have it now and end up smacking my limbs off doors. Would you see a planet in the distance and then immediately crash into it? Very unlikely. In good sci-fi, everything needs to be RELATIVE to everything else or it just doesn’t work.

Text Reads: Captain Crimson walked slowly to the door. He opened it and no sooner had  he stepped out then giant vegetables came bouncing along and  tried to bounce on top of them.

Why the heck would the aliens be vegetables? I guess more broadly applied to all sci-fi intergalactic life needs to be BELIEVABLE. It’s all good making a vegetable-like alien but why would he have adapted to be that shape? So many questions raised, not many answered so far…

You may also start to notice that there are lots of crossing outs and edits. This hasn’t been done by someone else… this was me being a total nerd and “marking” my own work. I’d advise you to NEVER SELF EDIT – get someone else to check your writing for errors before you publish it anywhere. 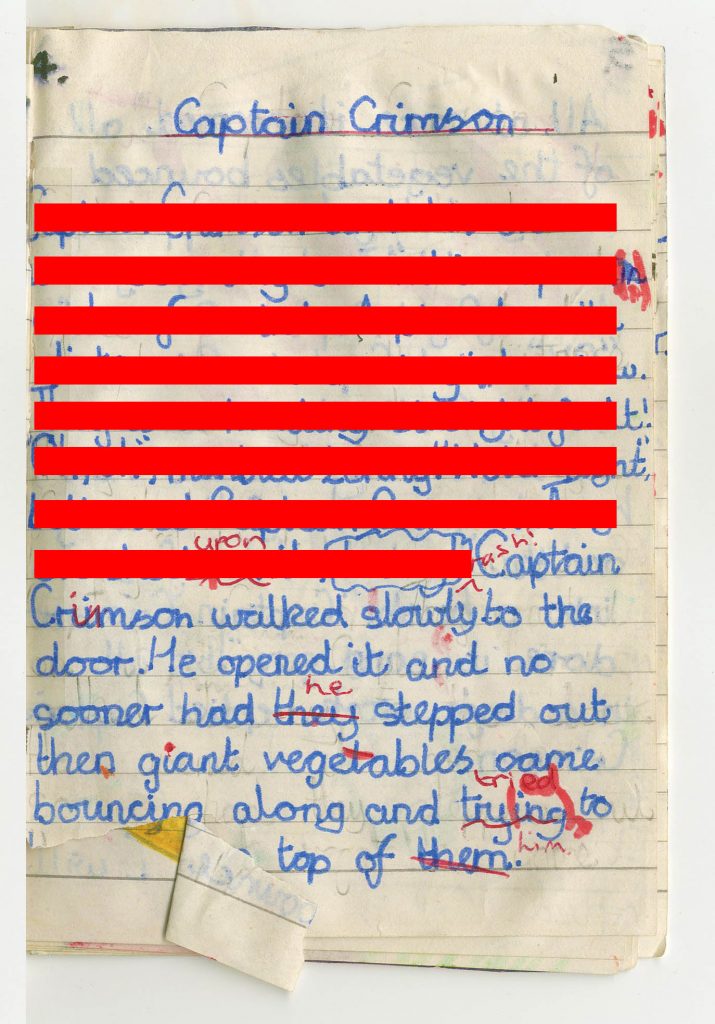 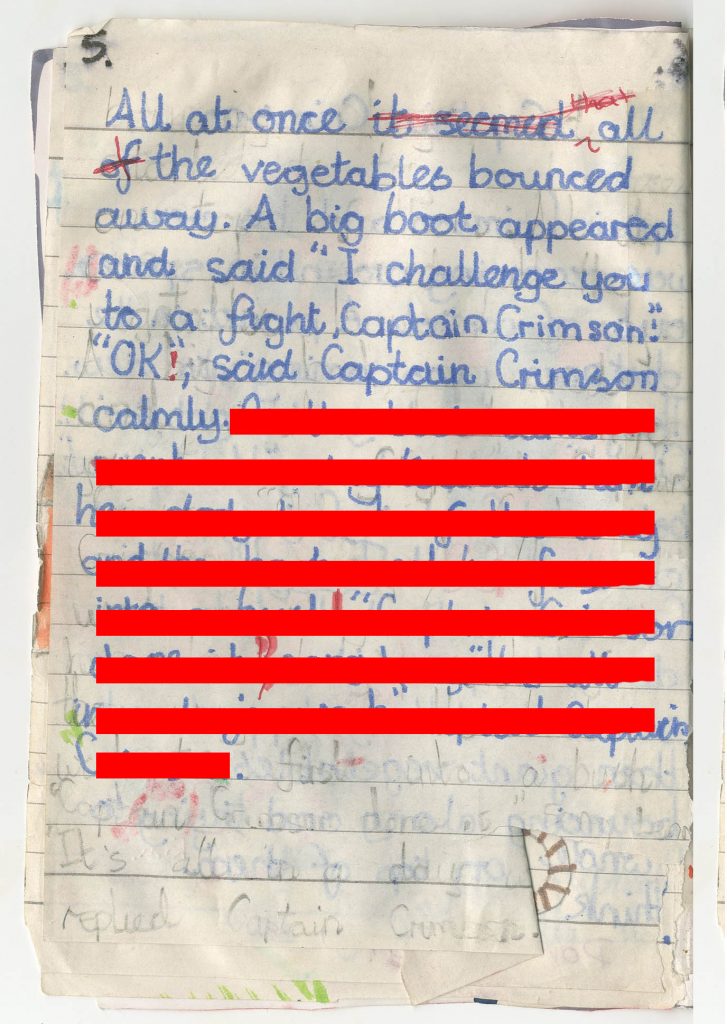 Text Reads: All at once  all of the vegetables bounced away. A big boot appeared and said “I challenge you to a fight, Captain Crimson. “OK!” said Captain Crimson, calmly.

Captain C is really showing this… alien boot… who’s boss. I think with all characters in Sci-Fi (similar with any story I guess) is the idea LIKEABILITY or, at least the ability to hate someone effectively. If you don’t have a hero or an antihero, or heroine for that matter, then you end up with bland stories. (Think what Game of Thrones books would be like without the character development…)

Text reads: As the boot came  running towards him he dodged out of the way and the boot went toe first into a bush! “Captain Crimson done it,” sang Lenny. “It’s all in a day’s work,” replied Captain Crimson.

I have to hand it to my 8-year-old imagination for the effort but in conclusion, this story seems a little vague. Sci-fi can’t leave much to speculation – those reading it likely already have minds that can fathom the size of universes, so don’t leave them to go wild! Then you might lose meaning altogether. I think overall here, the meaning was I didn’t like vegetables very much. 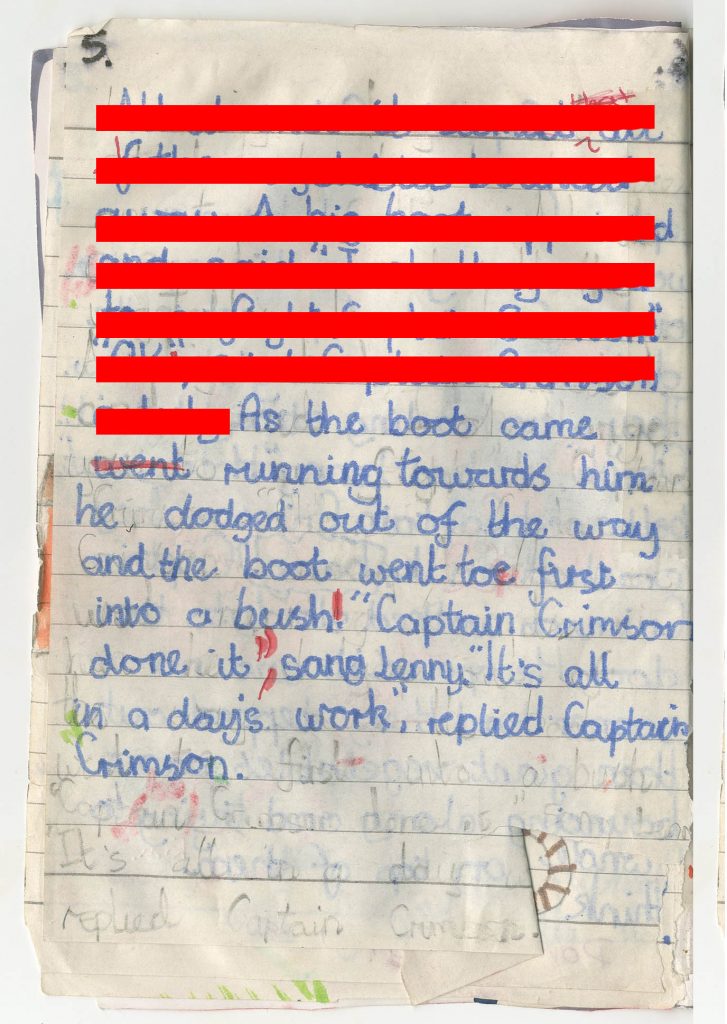 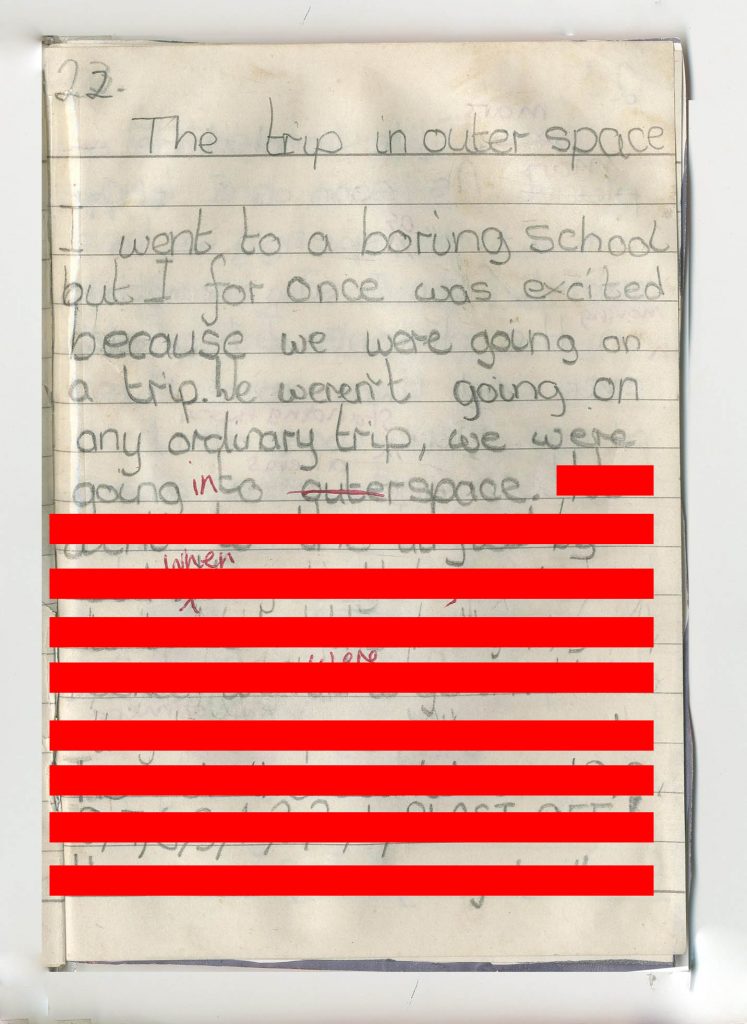 Where the heck is my school? Is it normal that I get to go on a trip to space? I think good Sci-fi novels and movies give a good indication of their WORLD BOUNDARIES & LIMITATIONS. Are we talking about a multiverse? The future? A planet shared by multiple species of alien? Tiny people living in the carpet? It all needs to be laid out for us.

I think another important thing is to know your audience. You may have been thinking of this magical alternative universe for years as you frantically write, but these people don’t. Where you shouldn’t assume that people know everything you’re talking about, you should also assume that PEOPLE WILL UNDERSTAND BASIC TROPES related to the genre. 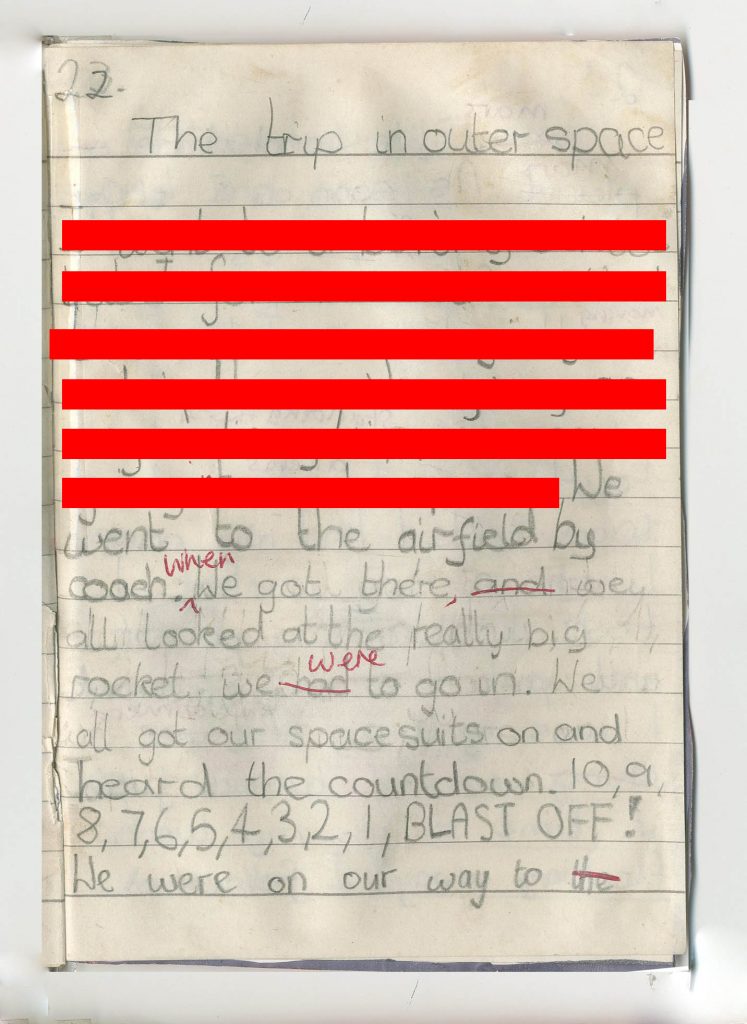 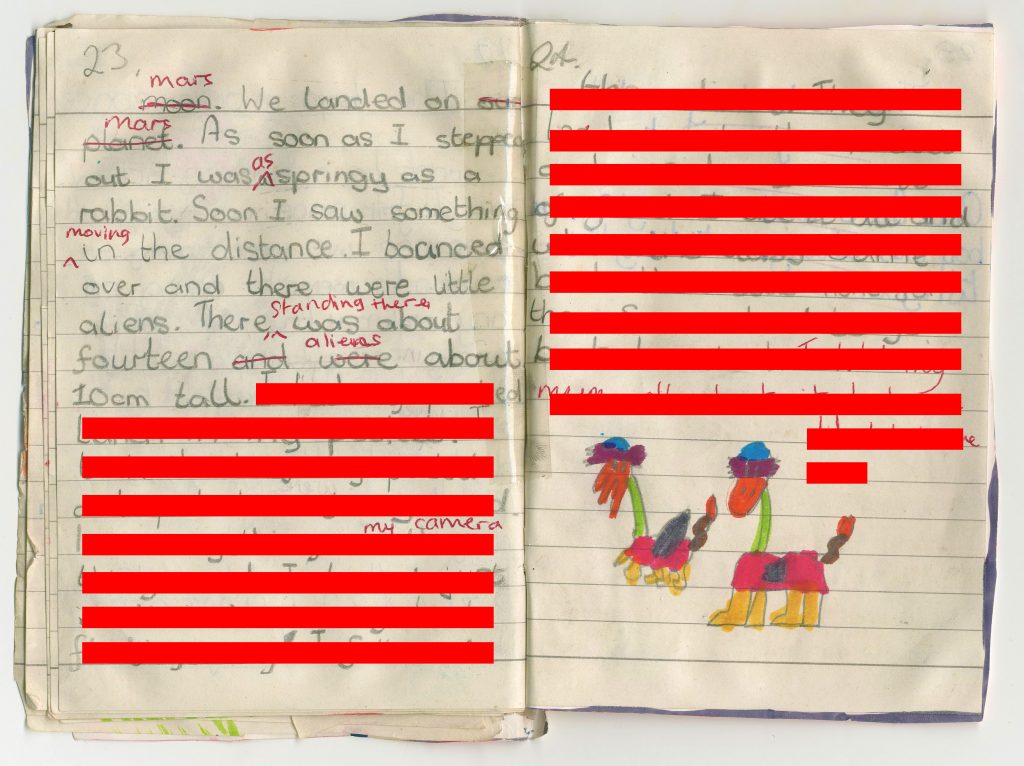 Text reads: We were on our way to  Mars. We landed on  Mars. As soon as I stepped out I was as springy as a rabbit. Soon I saw something moving in the distance. I bounced over and there were little aliens. There standing there was about fourteen  aliens about 10cm tall.

Don’t skimp on the descriptions.

I started off so well here with my powerful rabbit simile but it all went downhill at the prospect of the aliens. If you’re going to create these fantastic and amazing new species then please DESCRIBE them well! I know my pictures speak for themselves but this is super important to a cohesive, believable universe. 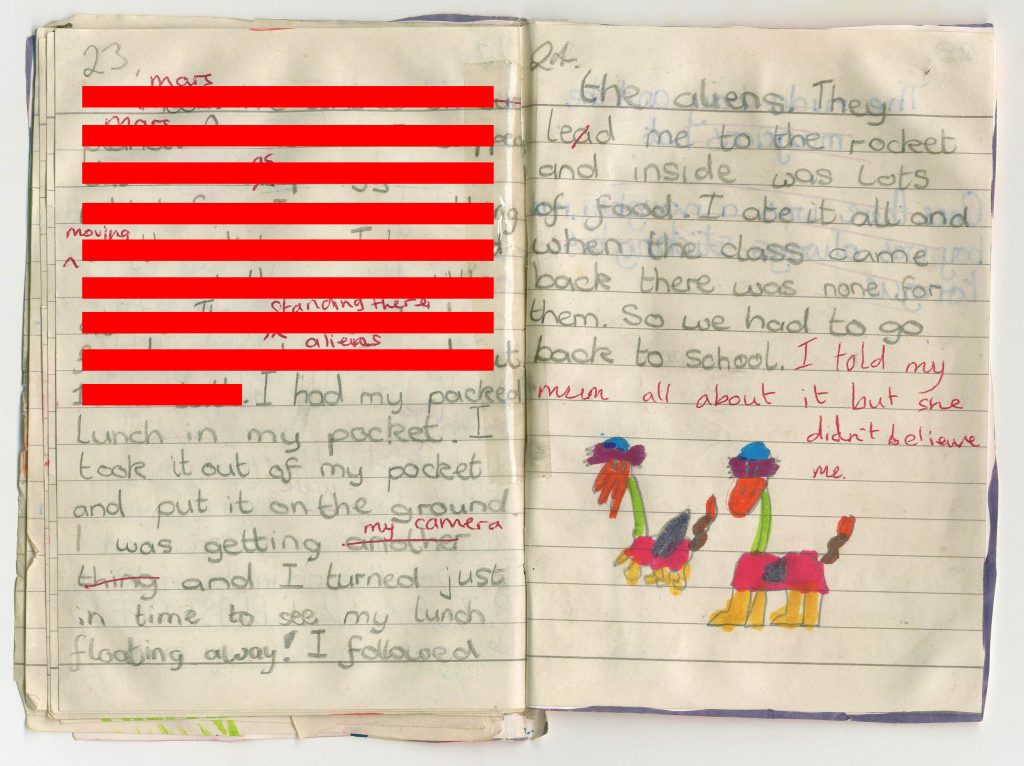 I had a packed lunch in my pocket. I took it out of my pocket and put it on the ground. I was getting  my camera and I turned just in time to see my lunch floating away! I followed the aliens. They led me to the rocket and inside was lots of food. I ate it all and when the class came back there was none for them. So we had to go back to school. I told my mum all about it but she didn’t believe me.

A good writer shouldn’t let external mood changes affect their work. Of course in a broader sense you should draw from your real feelings and experiences but maybe don’t write about how hangry you are. It’s just not my best, what can I say?

So now you’re all set to write a Sci-Fi Story!

I hope these pointers have been helpful for you as your depart on your voyage to another universe! Overall just write from your heart, get a decent editor and don’t be disheartened if your work isn’t the best.

If you’re writing for the love of it (which I hope you are) then who cares? 8 year old me didn’t hold back from her dreams and neither should you.