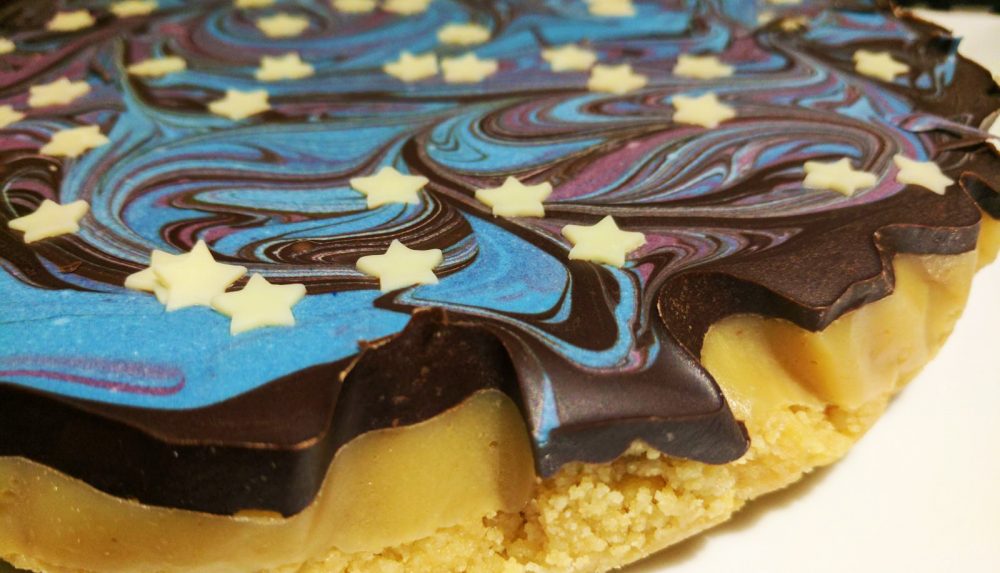 After finding a few Millionaire’s Shortbread recipes online and in magazines, I thought… It could be SUPER easy to adapt these traditional recipes to make them perfect for a space themed party!

I based the quantities for this no-bake recipe on how much of the ingredients I had in my house, but you can change these up depending on how many pieces you want to make! Also, a lot of people make their own shortbread base but I have NO time for that so… I used shortbread biscuits! 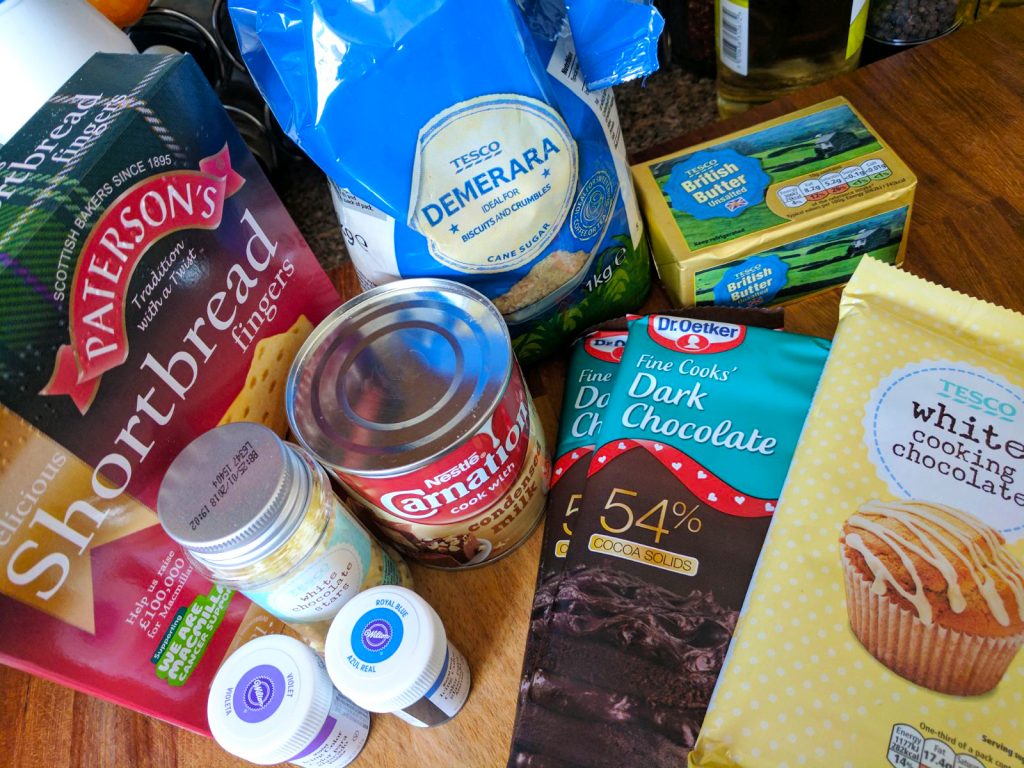 1 can of condensed milk

To Boldly Go Where No Man Has Gone Before!

Firstly crush the shortbread up with the end of a rolling pin with cling film over the top. You could get a little bit obsessive about this like me and make sure that the grains are even with no lumps and bumps, after all, the smaller the pieces the better it will stick together.

Add the 50g butter and mix it through, then press the biscuits hard to form an even base. I’ve learned from my previous cheesecake recipe, that it’s a good idea to use baking paper underneath! Pop in the fridge to chill while you make the caramel. (about 15 mins) 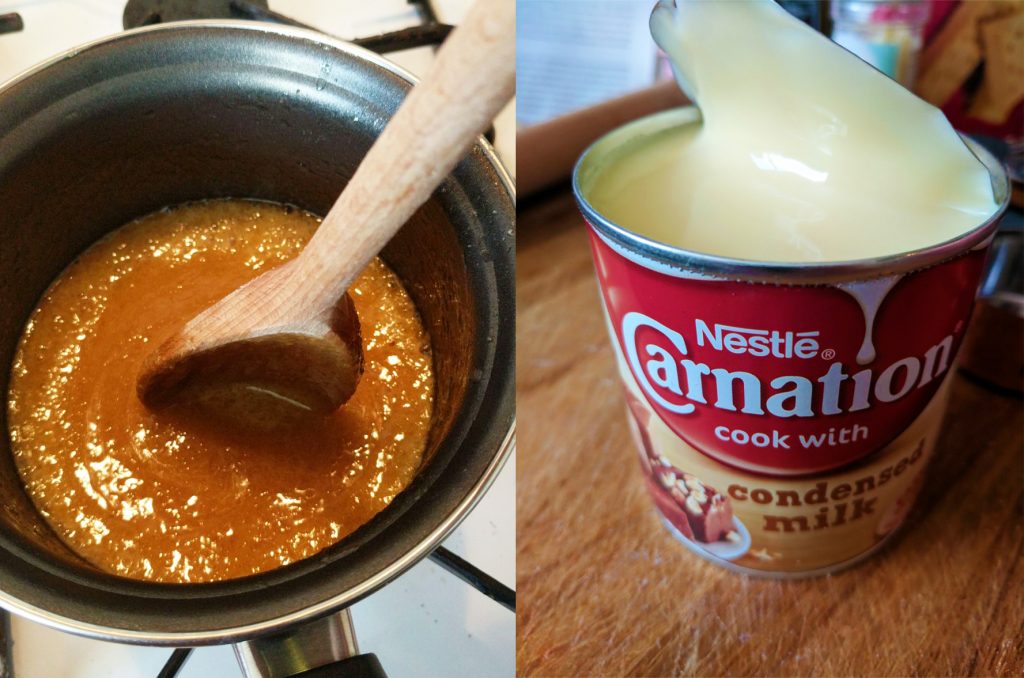 To make the caramel centre layer, heat up the 100g butter and the sugar on a low heat until all the sugar has melted and it’s not grainy. Then add the condensed milk and bring up to a rapid bubble (you may need to increase the heat a little).

You will find that the mixture starts to get a little tougher to stir as it thickens – this means it’s done! Tip it onto your newly chilled base and pop it back in the fridge. 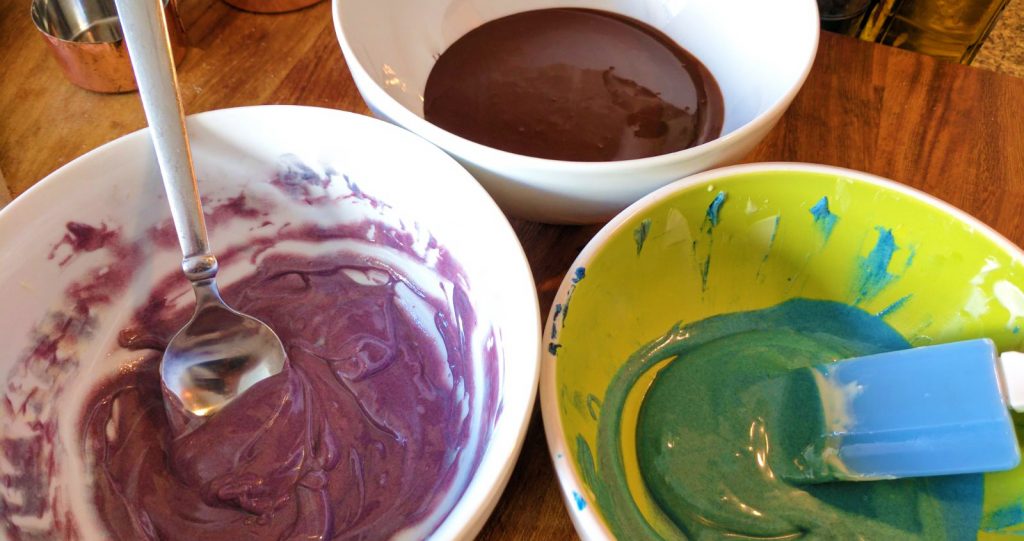 Next, melt the chocolate into three bowls (all the dark, and split the white into 2). I did this by popping a bowl over boiling water, but you could do it in a pan on low heat or in the microwave. Add a few drops of the gel colouring into the separated white chocolate – I opted for blue and purple for a galactic theme!

Next, making sure that the caramel has set, smooth out all the dark chocolate on the top and then dollop the mixture on top at random. Swirl and create a marbled nebula effect with a chopstick then scatter on your stars – there is no right way to do this, just throw them everywhere! 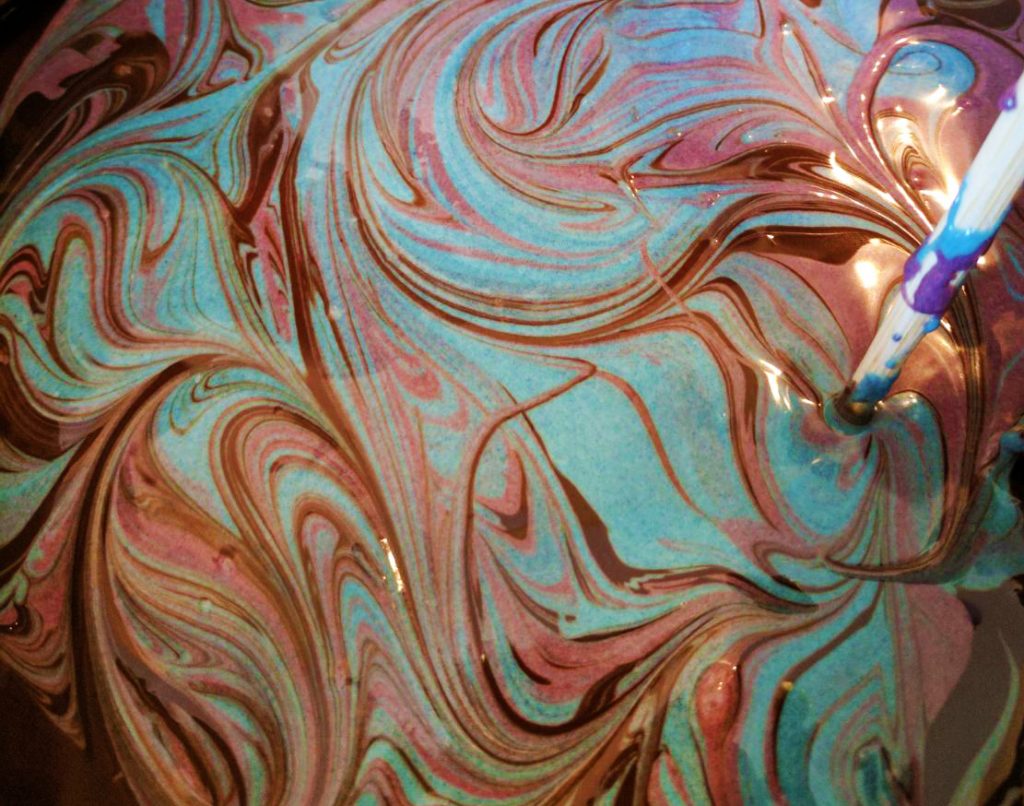 Ready for a Space themed Party!

Pop it back in the fridge for a few hours (I went to see Guardian’s of the Galaxy 2 at the cinema when I’d finished and it was done when I got back!), then this is the bit where I internally scream every time. Pull the shortbread from the tin and peel away the baking paper from underneath as neatly as you can. Did anything fall off? No? Awesome! 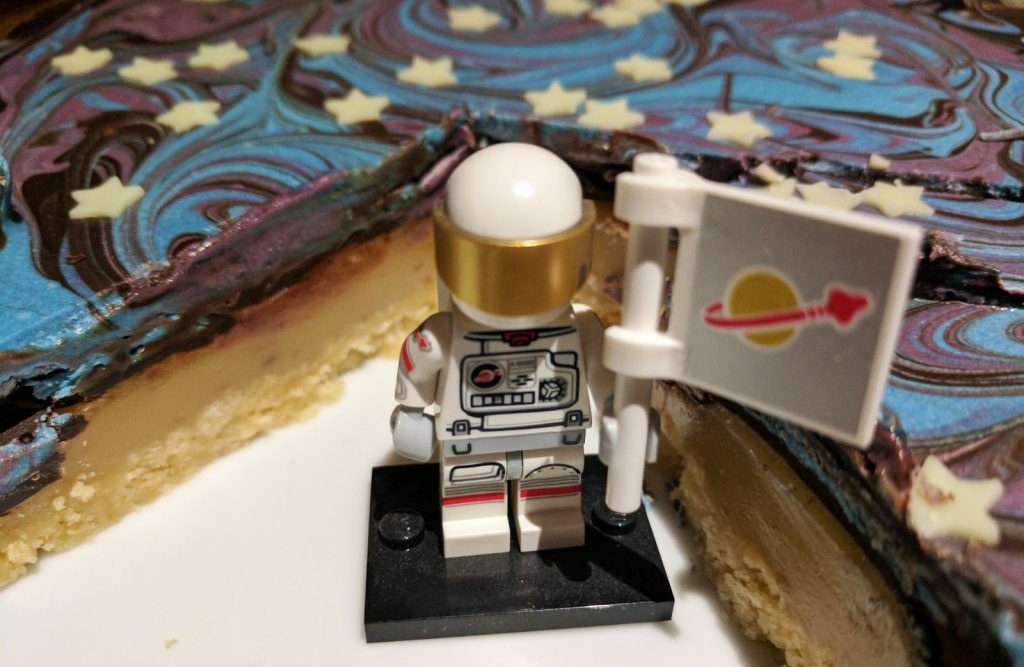 I learned from this recipe to cut the shortbread into pieces using a hot knife as it’s the best way to cut through the top layer of chocolate. This made around 30 pieces give or take.

And there you have it! What do you think? 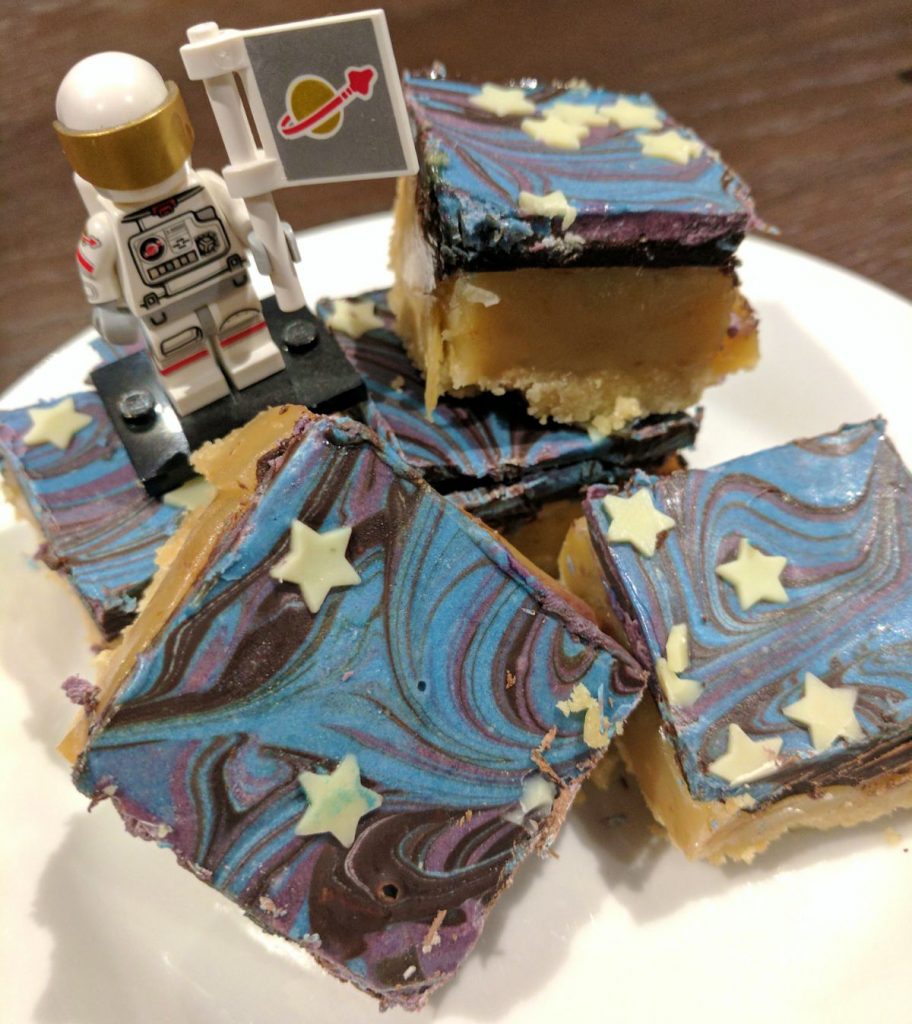 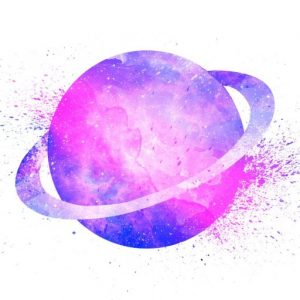 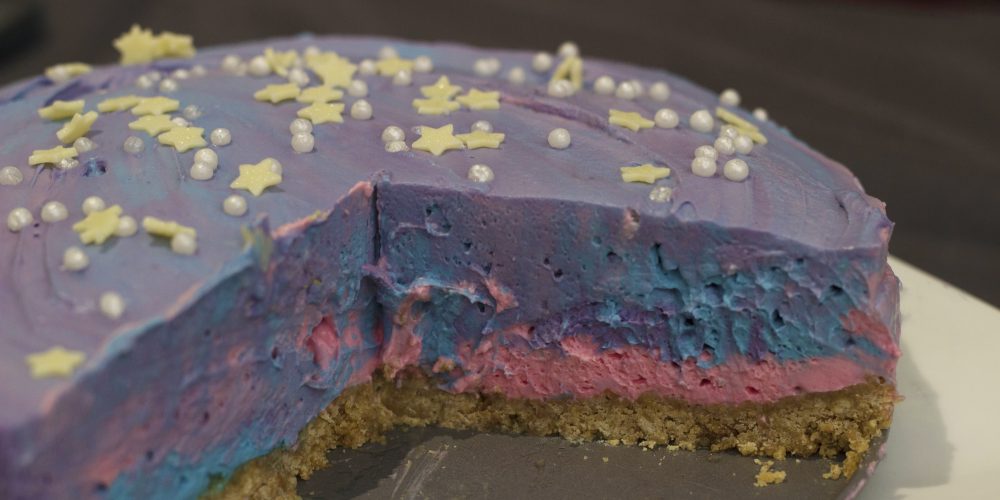 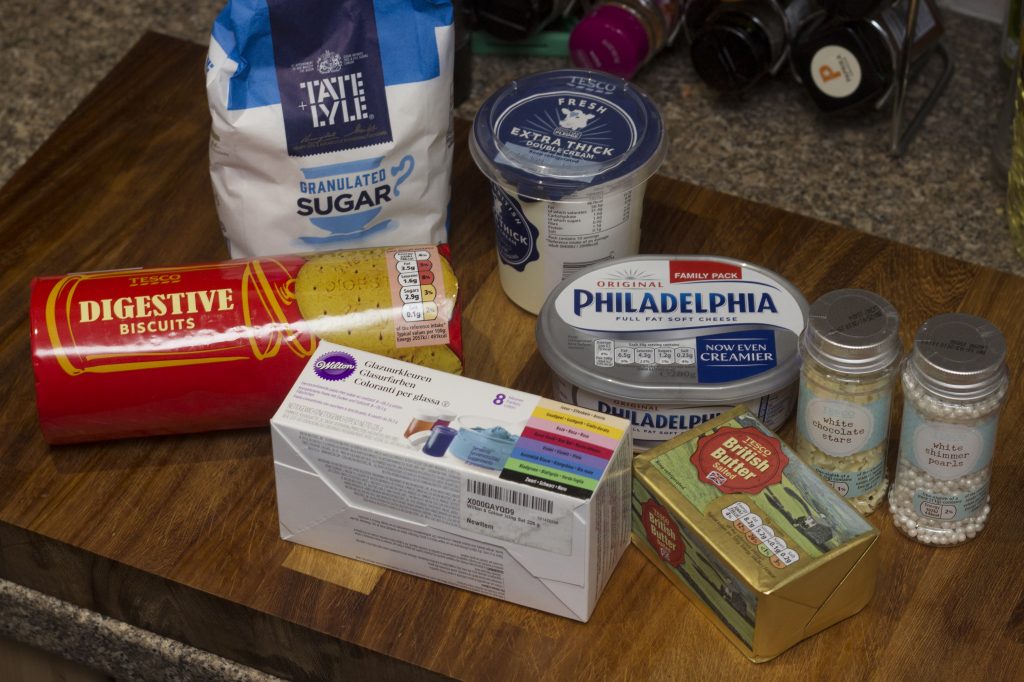 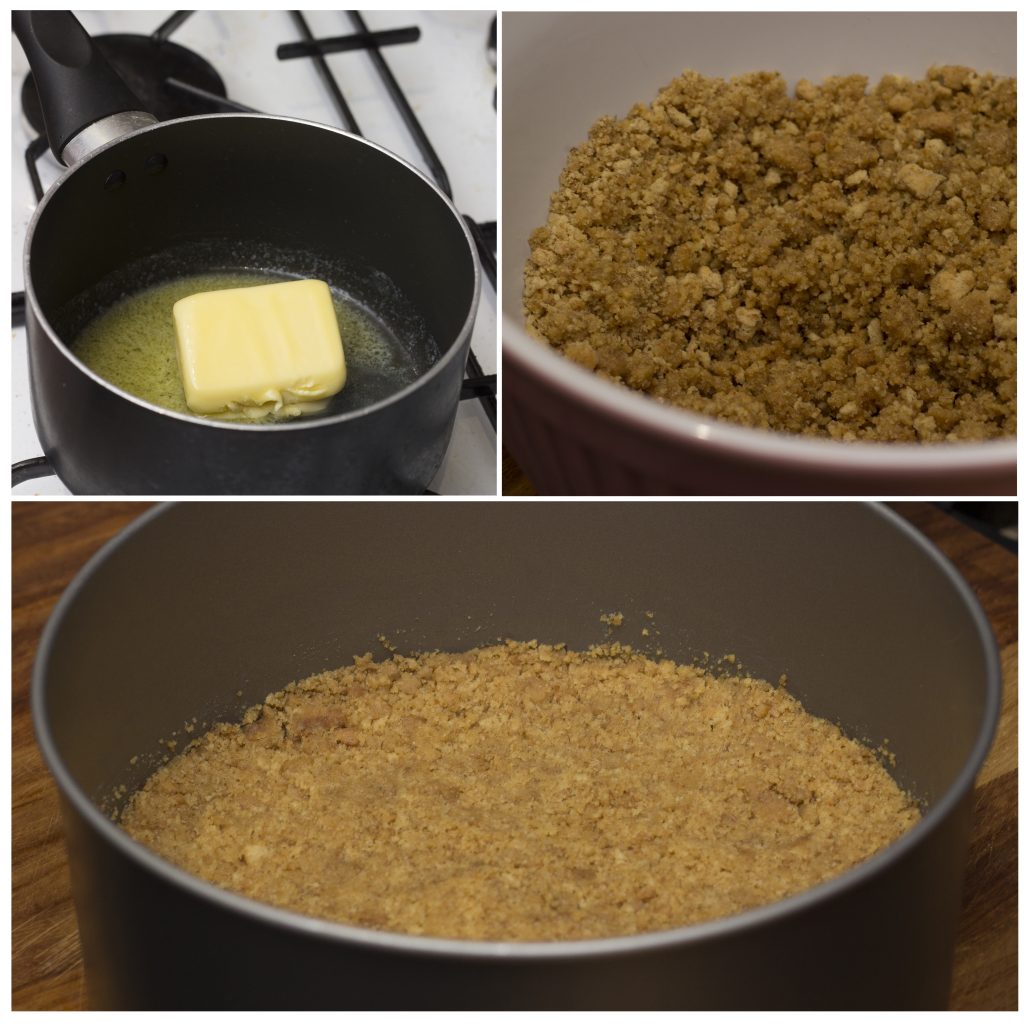 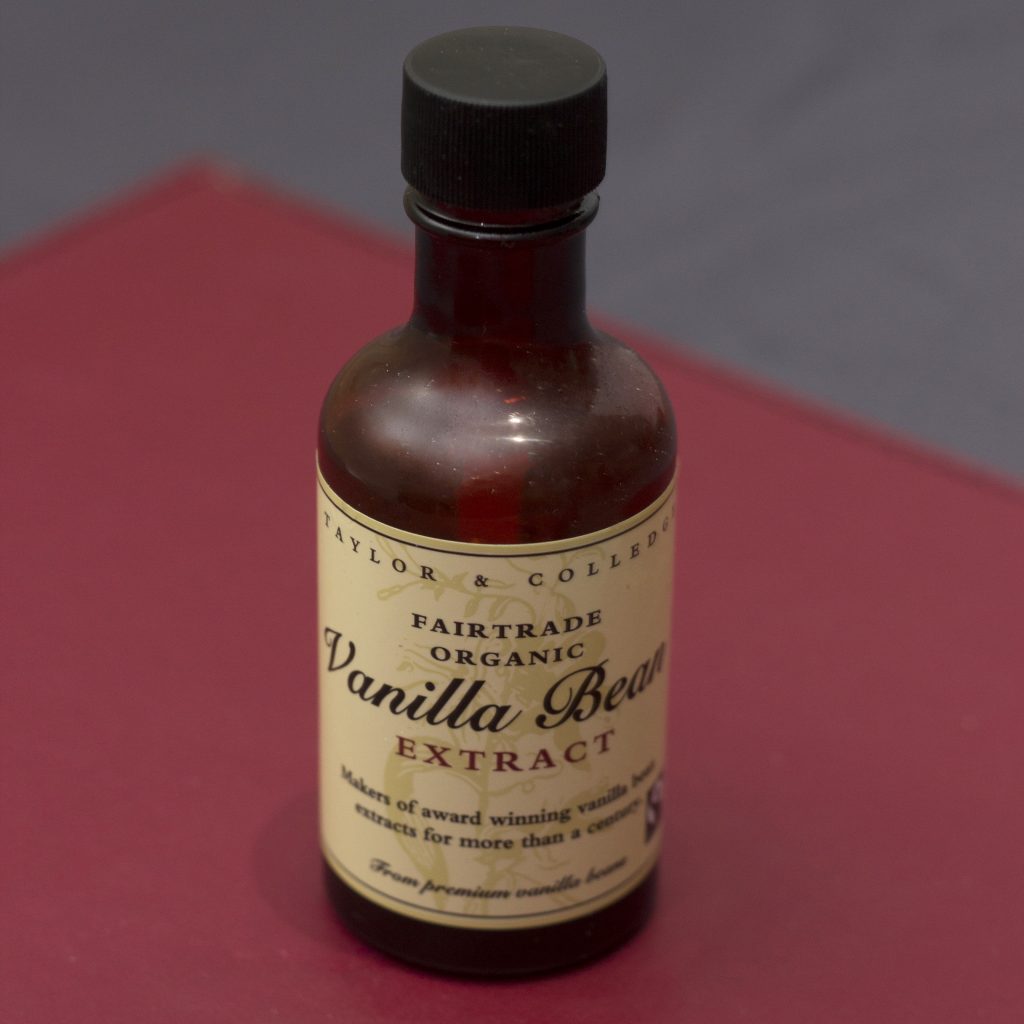 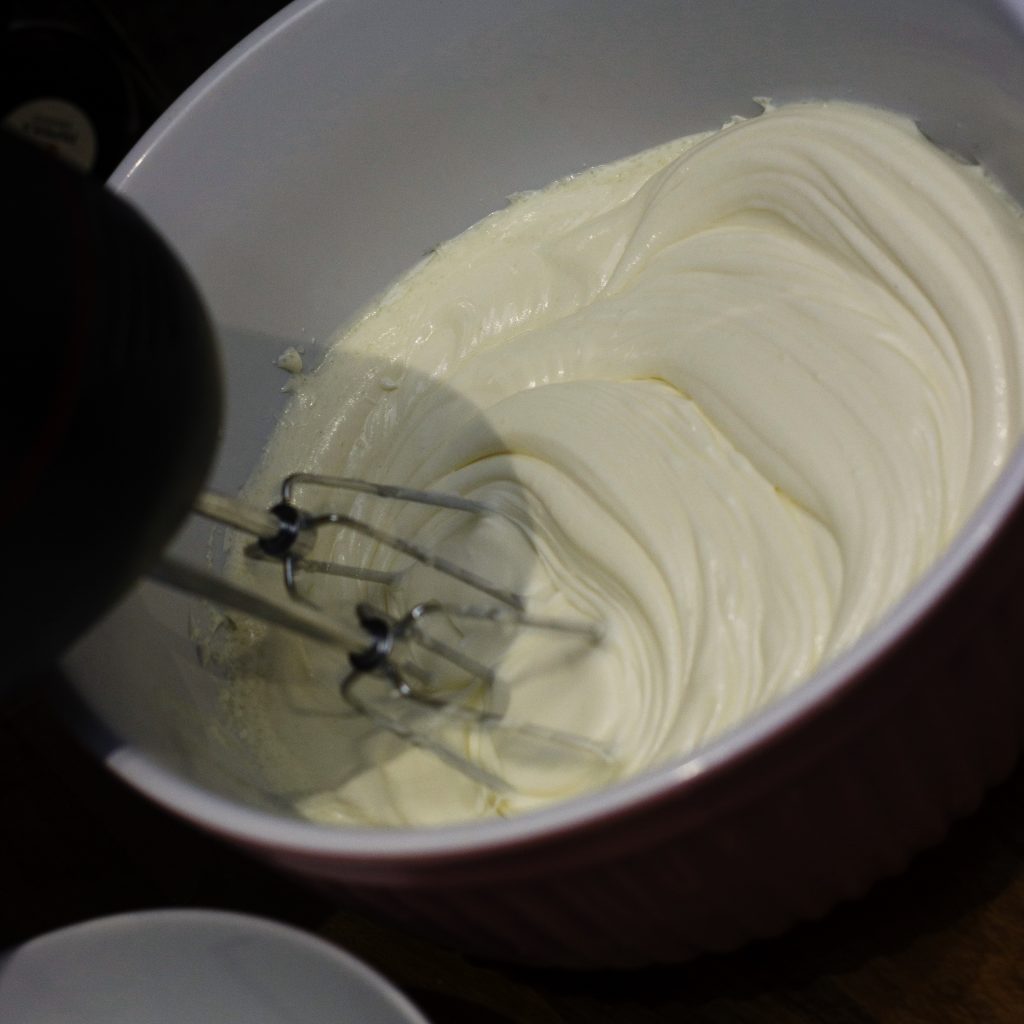 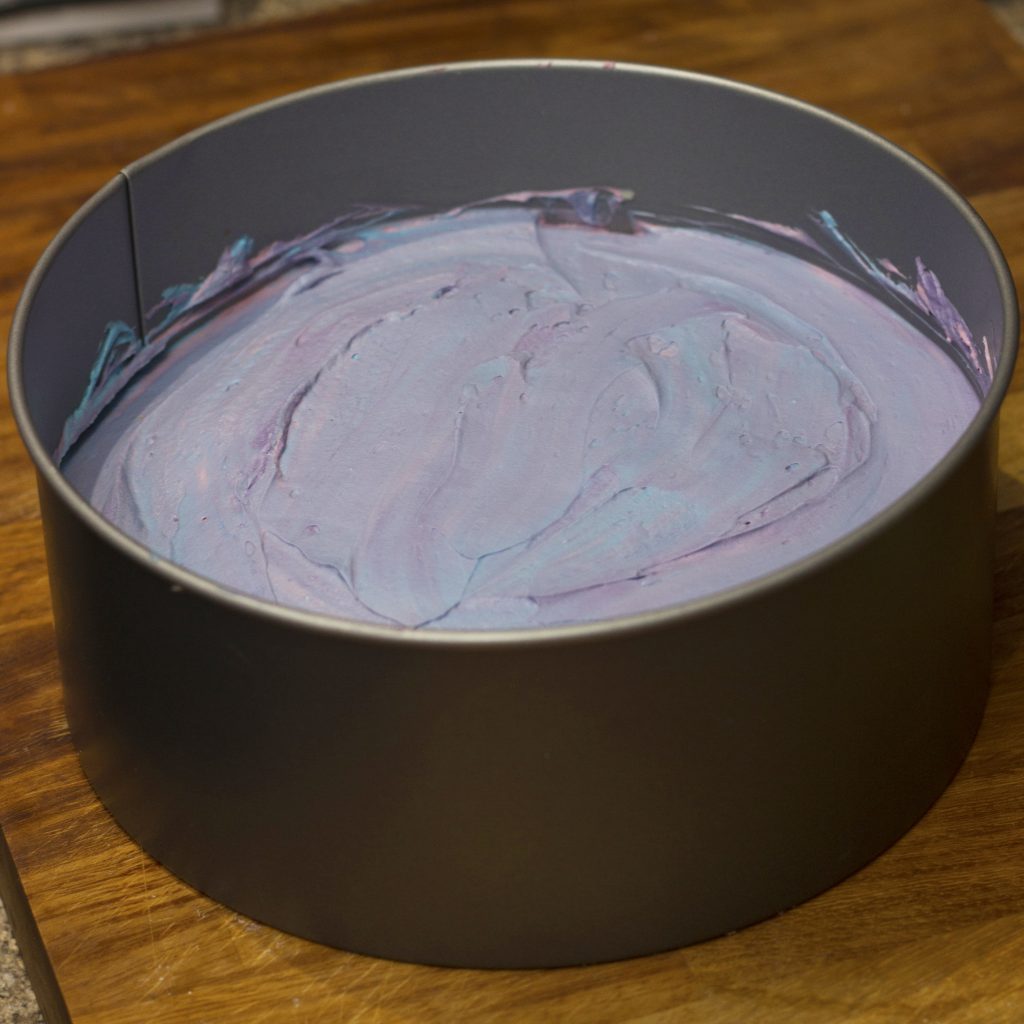 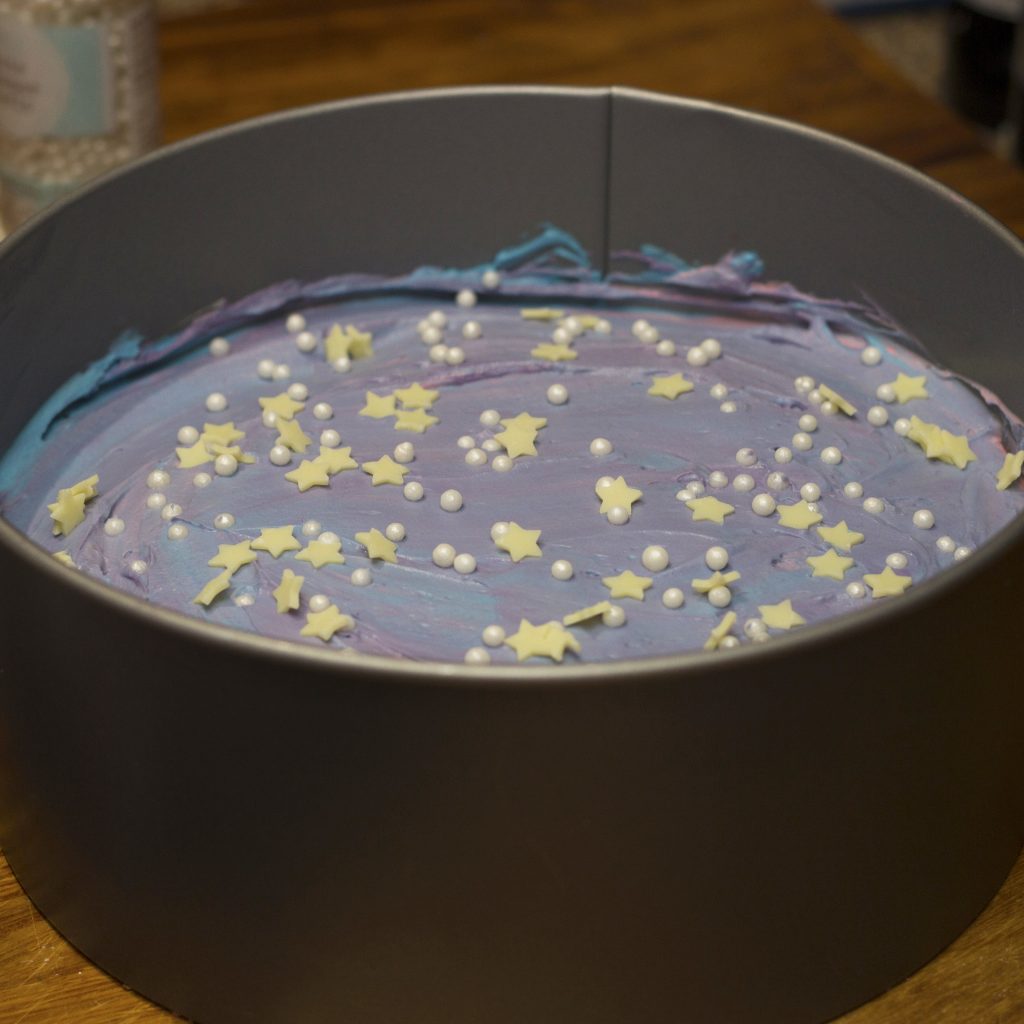 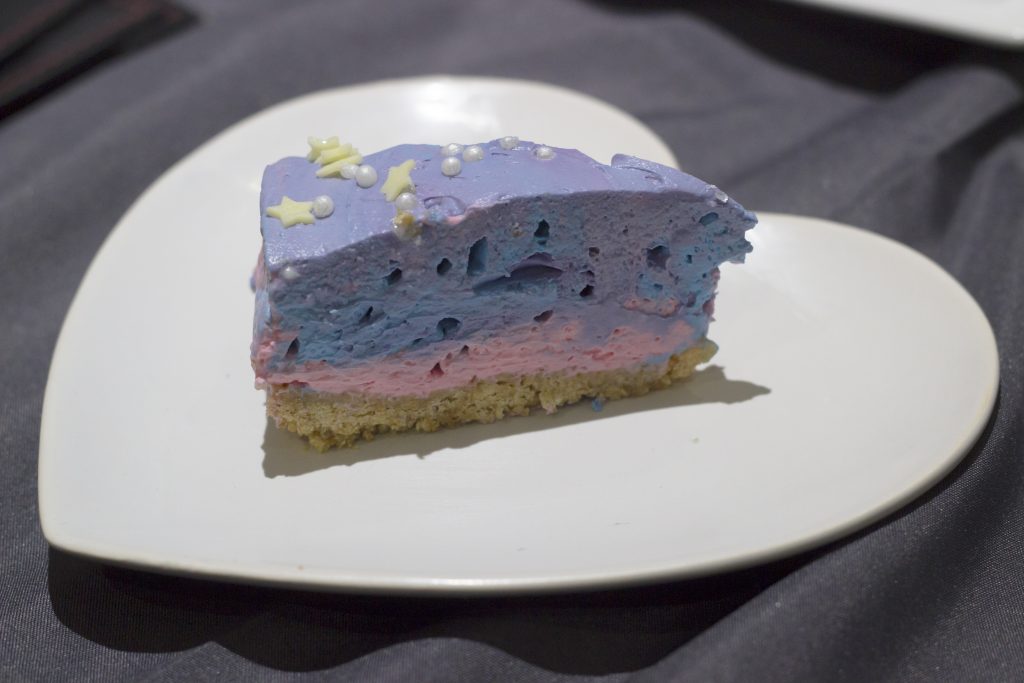 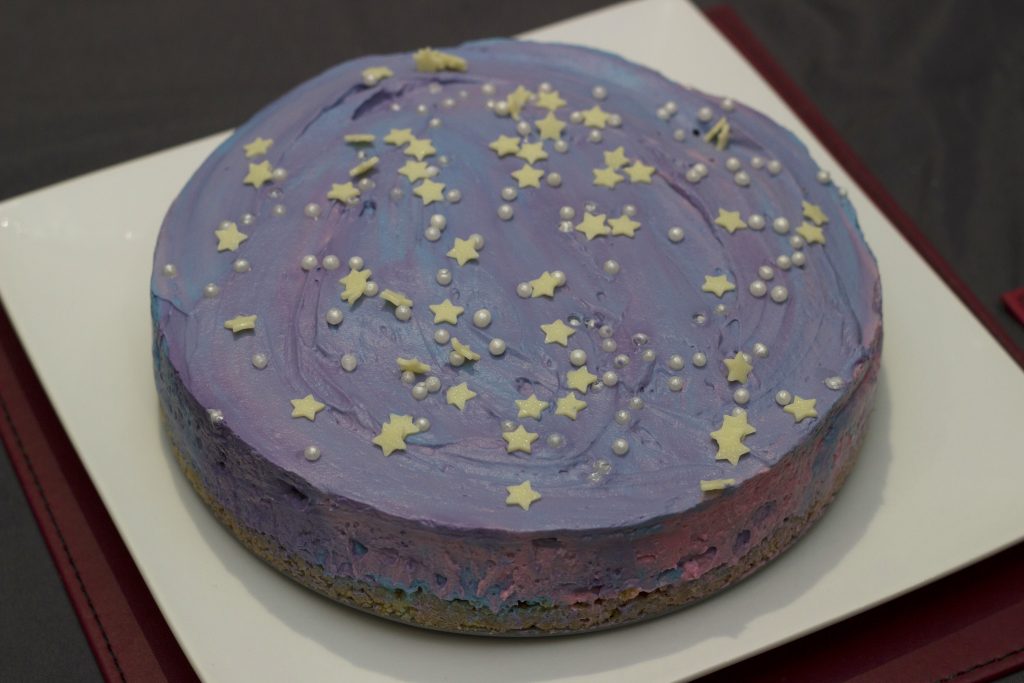