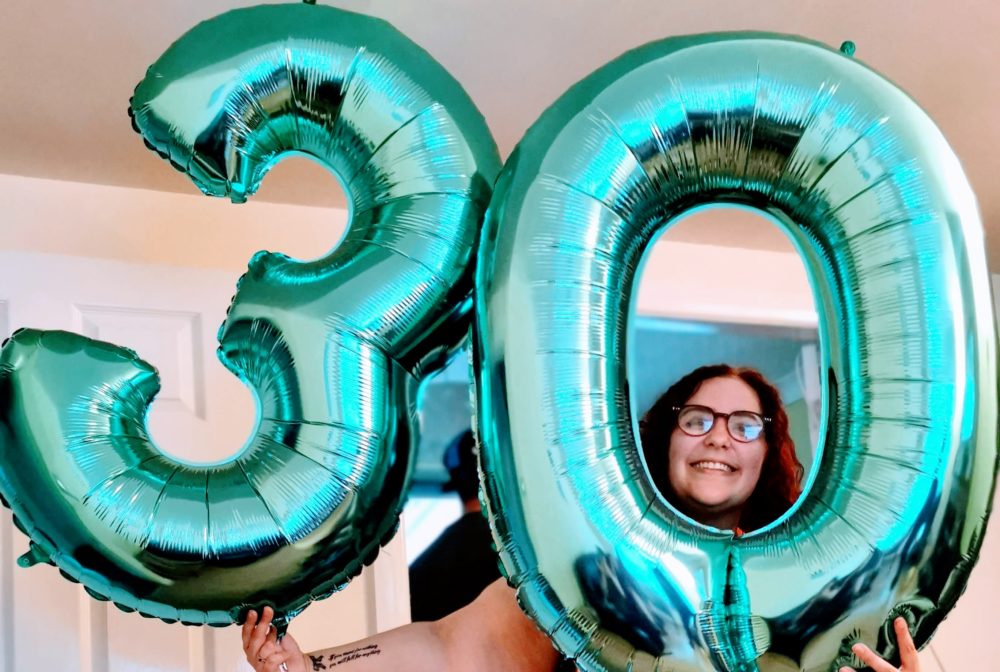 WOW. What a year… I know things have turned a bit rubbish recently but you know, I’ve had a fantastic year! I’ve enjoyed about 90% of it which I’d say is pretty fantastic. This post is mostly here as I just wanted to write down all I’ve done this year and reflect on how many things have progressed. So often I feel like I’m going nowhere fast so…. time to prove myself wrong!

I became a Marketing Executive

In January, I started my new job as a Marketing Executive for an awesome company and I was so damn proud to be given this title after 6 years of working my ass off. Have to say, almost 1 year on and I’m smashing it so far! This was also the month I got my beautiful little Penelope! <3 Ugh, what a delight.

Does this mean I’m a writer now?

In March, I got my first ever paid writing gig. Such an amazing feeling. I don’t have the time to pursue writing outside of work nowadays as I write copy all day and then write a blog (sometimes) by night! But at the time it felt good to know people recognised my work as something with value.

I started to write for a local publication and it gave me access to new things, and I’ve interviewed an incredible bunch of people and helped them celebrate their own uniqueness. Check out one of my favourite interviews with my good friend, Dominic Russell.

My body-confidence grew and grew (and shrank) but then grew!

I did something I hadn’t done since I was in Scouts – I successfully completed a High Ropes course. What a rush! I never thought I’d be able to do something like that again… And I proved myself wrong. Check out my post about it!

I broke down my body confidence barriers and just thought fuck it… I’m gonna get in the ocean and double fuck it, I’m gonna put pics of me in my bikini on the Internet! I’d like to say my confidence has stuck around all year but of course, we all how our ups and downs…

In the press, on the radio, online

I visited the set where some of the first series of Game of Thrones was filmed in Mdina – Malta, during which I actually got invited to be on World News. Sorry let me just say that again… I GOT INVITED TO BE ON BBC WORLD NEWS to talk about Game of Thrones – one of my favourite ever TV shows. What an absolute dream!

I’ve been on my local radio station quite a few times this year which has been awesome – I’m on there semi-regularly now. I even ended up on the front of the newspaper – don’t worry, all good things! I raised money for my favourite bookshop when they had a flood and tons of people came to their aid! So happy that it helped… the newspaper thing was just a bonus and it also dubbed me “Local Creative, Amy Turner” so my ego is now as big as a garage.

I said goodbye to an old community, and built a new one

In June, I hung up Muggle Musings sorting hat – after running the Harry Potter discussion group for over a year I’d outgrown it a little bit. As much as I love Harry Potter, it doesn’t really define me as much as it used to but it was such a lovely era of my life and it was hard to let go…

Coventry Geeks was born! I founded a new group of like-minded locals and started trying to forge connections between people in Coventry who were all nerdy! We’ve had so much fun so far at some awesome activities. Can’t wait to see what 2020 brings for the group!

As part of Coventry Geeks, we ran a geek market. It was a huge project which ended up taking a lot of man power (a lot more than I originally anticipated) but it was a huge success. My part was mostly in the marketing which y’know… brought a couple of hundred people in. No big deal.

Disclaimer: It was a big deal, it was so difficult, we all worked so damn hard but it was worth it to see it all at the end and get such awesome comments. I crashed hard afterwards.

An Incredible Year for Collaborations

I got an AMAZING opportunity offered to me – an affiliation with a phone company who offered me over £300 worth of stuff so I could write a blog post about my experience. It’s the first time I’ve ever been offered something like that before! Ended up being an incredible experience – check it out here (Sponsored content.)

I’ve also collaborated with so many brilliant people this year – this is a pic from one of the many bubble tea collab* parties this year with my good friends over at Bubble Boba. It was so much fun and this shop will always have a little place in my heart!

And now… Big Potato games said they’d like to work with me – I’ve absolutely loved their party games so I’m so HAPPY! Can’t wait to get stuck into some in-depth reviews of some of my favourite games of theirs.

Getting back to normal…

This year isn’t without its lows. I’ve just kinda got past this seriously difficult anxious numbness recently and you know what, I’d say my biggest achievement is still managing to excel at work, while tackling my constant struggles with myself. I am finally coming to terms with the fact I’ve been feeling so low and getting past it and making some changes to the way I act.

Oh yeah, I also turned 30. That was weird. Let’s never speak of that again because I’m going to be 30 forever.

I’m going to relax now, and enjoy my Christmas time before launching RIGHT into the RAWRing 20’s! Can’t wait to see what this year has in store for me – I’m going to keep striving for the best version of me I can be. Have a wonderful new year everyone.