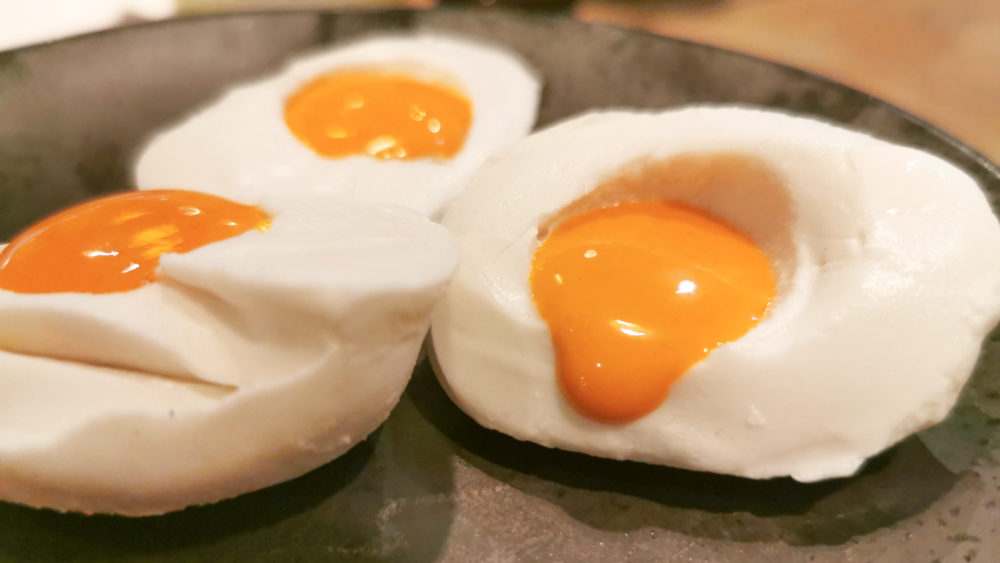 Has anyone been to Wagamama since the new vegan menu launch? I had the fantastic opportunity of checking out their new menu with a fab bunch of locals – and this is what I found out! I even solved the mystery of the vegan egg!

Disclaimer: This post contains pictures of a meal gifted to me by the lovely Wagamama Coventry through Coventry Bloggers.

Can we just back up for a moment and address the egg in the room? So the main reason that I was so intrigued was to try the new vegan egg – and my gosh it reminded me of Gudetama so much – can you see the resemblance? It’s actually made out of coconut milk and cornflour with a centre that’s sriracha mayonnaise. MAYONNAISE? I hear you cry! … Well that bit is vegan too!

I absolutely love Japanese food in general and although some may say you can’t beat the real thing – it’s still damn tasty and there are some things that I’ve discovered that I couldn’t put down! I managed to finish off all my fellow diner’s Bang Bang Cauliflower because it was seriously unlike anything cauliflower I’ve ever tasted!

We also got to try a range of different vegan dishes including the brilliantly named “Avant Gard’n” – it literally looks like a small garden on your plate. This is where you’ll find the vegan egg as the centrepiece (we were lucky enough to get extras to try!) – it’s akin to the real thing in texture but different to anything else I’ve tasted before. They’ve done something magical with the seitan in this dish too – seriously yummy.

I did the honourable thing of checking the difference between the yasai (vegetable) katsu curry, the vegan katsu (vegatsu) and the chicken katsu curry so you don’t have to! I can confirm… *drum roll* the yasai version is the best! Next time I have a katsu curry I think I’ll opt for this one.

Just when I thought I couldn’t eat any more… Suddenly, dessert arrived. But that’s usually digested by a separate stomach anyway so… there’s always room for dessert. It’s lucky for me that I had room too, because these were delicious.

We tried two different types of ice-cream, one of which was so chocolatey that I couldn’t even tell the difference between this and a dairy ice cream. And the pièce de résistance – this fantastic vegan mango + matcha layer cake. Oh my gosh – the best thing since sliced… cake.

So there you have it! My experience of Wagamama’s incredible new vegan menu that I was delighted to take my (vegan) parents to later on that month – and they loved it too! Have to do a massive shout-out to the super informative staff that helped us along the way!